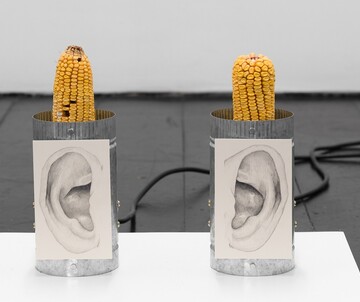 The collection, analysis, and circulation of ecological data, often invisible to the human eye, is at the core of Jesse Stecklow’s artistic practice. The Los Angeles-based artist (b. 1993) works with a precisely defined repertoire of objects that oscillate between image, text and sound. His sculptures enter into a dialogue with their surrounding environment, effectively confusing the boundaries of the work. Stecklow is less concerned with the singular object itself. Rather, he is interested in the various narratives that are created through location-related shifts in context. Stecklow refers to his objects as characters. They take on different roles depending on the situation in which they find themselves, thus assuming multiple identities in divergent forms.

In his first European museum exhibition, titled Terminal, Stecklow will transform the exhibition space into a waiting room. He will present various versions of his sculptures in repetition across displays he designed as a hybrid between luggage carousels and dining tables. These forms can be traced back to the shifts that have taken place between public and private spaces over the course of the pandemic: While the once so heavily frequented airport terminals emptied, our hitherto lonely dining tables have filled up, becoming offices and school desks.