Spread over 90,000m2 in central Vienna and encompassing 60 cultural institutions, the MuseumsQuartier Wien is one of the largest districts for contemporary art and culture in the world. Nothing is off limits at the MuseumsQuartier. Historic architecture meets contemporary design. High culture meets subcultures. The spectrum ranges from fine art, architecture, music, fashion, theater, dance, literature, children’s culture, game culture, and street art to design and photography. 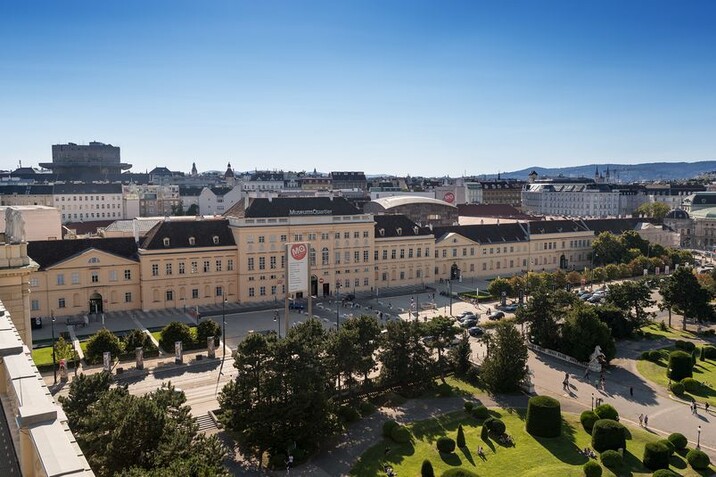 New ideas grow from historical foundations. Built in the early eighteenth century as Vienna’s imperial stables and expanded through the addition of modern buildings when the MuseumsQuartier was created, the mix of baroque and contemporary architecture symbolizes the distinctive character of the complex. Today the MuseumsQuartier is a platform for cutting-edge artistic creation, new discourses, and the exchange of ideas.

Cultural workers, creative entrepreneurs, artists, the Viennese public, visitors from all over the world: the MuseumsQuartier is used by a whole host of different people. They all make the MuseumsQuartier what it is today – a pulsating, cosmopolitan, and forward-looking cultural district with a feel-good factor.

The MuseumsQuartier is a place of encounter. The site is open around the clock and entry is free; there are no gates and no barriers. The world-famous MQ furniture in the courtyards invites visitors to hang out, relax, and chat. And the many cafés and restaurants offer a wide range of culinary options.

This means that the MQ creates opportunities for dialogue between the Viennese public, international guests, artists, and many others. The people who come together here create a climate of cosmopolitanism and creativity. The MuseumsQuartier Wien is an art space, a creative space, and a living space.

Today’s MuseumsQuartier looks back over a dynamic history in which architecture has always played an important role. The combination of historic buildings and contemporary museum architecture has created a one-of-a-kind ensemble.

The MuseumsQuartier was built in the eighteenth century as Vienna’s imperial stables and was designed by the famous Austrian architect Johann Bernhard Fischer von Erlach. Together with the Hofburg Palace, the New Hofburg Palace, and the Museums of Art and Natural History, the stable complex was originally intended to form one end of the so-called “Kaiserforum,” planned as a complete urban ensemble. The main frontage, a baroque façade 400m in length, was completed in 1725. Between 1850 and 1854, the Winter Riding Hall in classical style was added in what is now the MQ Main Courtyard. 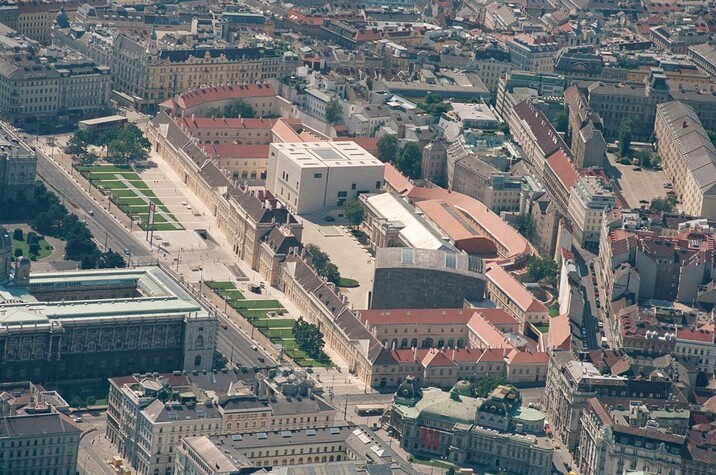 However, the most striking features of the complex are the new buildings constructed as part of its conversion into the MuseumsQuartier (1998-2001). They were designed by the Austrian architects Laurids and Manfred Ortner and create a space that brings together existing historical structures with contemporary architecture.

Entering the MuseumsQuartier through the Main Entrance in the Fischer von Erlach Wing, visitors come to the MQ Main Courtyard, one of the largest enclosed squares in the city. Straight ahead is the former Winter Riding Hall – now the Halle E+G performance and event venue with the new Kunsthalle Wien behind. To either side, positioned at a slight angle, stand new buildings: to the left the Leopold Museum and to the right the Museum moderner Kunst Stiftung Ludwig Wien (mumok). There is a special relationship between the two buildings and they take reference points from both the layout of the city center and Vienna’s 7th District located behind the MuseumsQuartier. The architecture also responds to the different collections housed in each institution.

The Leopold Museum’s pale structure takes up the right-angled positioning of the former imperial museums and lengthens the axis of what would have been the “Kaiserforum.” The museum’s external surfaces, including the roof, are faced with white limestone, a material that symbolizes the historical weight of the Leopold Collection inside. Exuding elegance and erudition, the stone cube rises to a height of 24 meters, with three underground levels taking it 13 meters beneath street level. The galleries are arranged around an inner atrium and the upper levels are flooded with light.

The mumok, with its façade of dark grey basalt, stands in stark contrast. The curved roof makes it seem as if the museum has just risen from the depths. The edges of the building are rounded, creating the impression of a body taking shape, in contrast to the precise angularity of the Leopold Museum. The mumok has two underground and three upper levels, which are linked internally by 41-meter high space.

The entrances to the Leopold Museum and mumok are at four meters above street level in order to lessen and relativize the steep incline leading up to the 7th District.

Different again, the Kunsthalle Wien is clad entirely in red clinker bricks and is reminiscent of a production workshop. This is a reference to its focus on temporary exhibitions of contemporary art. As a free-standing structure, the Kunsthalle is tucked in tightly alongside the former Winter Riding School, with its tiled roof overlapping the latter’s roof edge. The Kunsthalle Wien has no openings for daylight other than narrow slit windows at each end. It is a lighting concept that deliberately uses artificial light throughout for viewing art.

Manfred Wehdorn was the main architect responsible for renovating and adapting the structures that are subject to preservation orders, in particular the Fischer von Erlach Wing, which now houses the Q21. Austrian architects were commissioned to design interventions within the historic baroque building stock.

For example, what is known as the Electric Avenue (architects: PPAG Anna Popelka and Georg Poduschka), with its shops and display spaces, brings angular variation to the niches and windows of the existing baroque structure. In the Ovaltrakt (architects: BEHF) along Breite Gasse, small, green interior courtyards were created through partial, rhythmic openings in the roof. These green spaces serve as a buffer zone between the public walkway, offices, and living spaces.

The many baroque archways and ceilings in the MQ were used in different ways when designing the restaurants and cafés. The Café.Restaurant.HALLE in the stylish ambience of the former Winter Riding Hall, which has a protected historic interior complete with period imperial box, was transformed by the architects of the EOK group (Gregor Eichinger) into a modern café-restaurant. The elegant interior design (architects: Eichinger oder Knechtl) creates a modern counterpoint to the older stucco moldings.
The French architects Anne Lacaton and Jean Philippe Vassal are responsible for the design of the Café Restaurant CORBACI. The pattern on the ceiling tiles was designed especially for the space in collaboration with the Vienna-based Turkish artist Asiye Kolbai-Kafalier and produced in Istanbul.

Almost 300 years span the start of construction work on the imperial stable complex in the early eighteenth century, its use later on as a venue for trade fairs and exhibitions, and the opening of the MuseumsQuartier Wien in 2001.

In 1713 Emperor Charles VI commissioned the famous Austrian architect Johann Fischer von Erlach to build a stable complex on the site of the imperial poultry yard. The principal façade was completed in 1725 and remains one of the longest baroque façades in existence in Vienna today. The ground floor of what is now the Fischer von Erlach Wing held stables for around 600 horses and the site as a whole housed carriage sheds and apartments for countless staff. The apartment of the imperial head groom was located in the staterooms on the first floor, today home to the Baroque Suite event spaces. 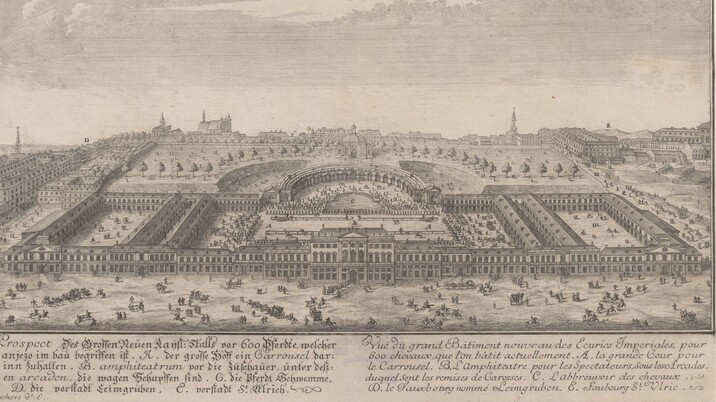 The following years brought several periods of alteration and expansion. From 1850 to 1854, Emperor Franz Joseph I built a Winter Riding School in the classical style, today’s Halle E+G. In 1874 a manège was constructed for the empress Elisabeth. The empress took riding lessons in this octagonal hall with Elise Petzold, a show rider in the world-famous Renz Circus. Today this riding hall houses the library of the Architekturzentrum Wien.

After the end of the Habsburg Monarchy in 1918, the large complex with its many internal and external spaces was used by the Wiener Messe as an exhibition arena for commercial trade fairs, giving rise to the name “Messepalast” or “Trade Fair Palace.” In the early 1980s, when the site had become too small for the Wiener Messe, the Republic of Austria and the City of Vienna commissioned a concept for using the site as a cultural forum.

A two-stage architectural competition was launched in 1986 and was won by the brothers Laurids and Manfred Ortner. The historic architecture was to be maintained but complemented through the addition of contemporary accents and buildings. The plans included three large new buildings: the Museum moderner Kunst Stiftung Ludwig Wien, or mumok for short, the Leopold Museum, containing the largest collection of Egon Schiele in the world, and the Kunsthalle Wien with a focus on international contemporary art.

Over the following years, citizens’ initiatives and media campaigns opposing the original plans led to changes to the dimensions of the new buildings.

Construction started in 1998 and, on 30 June 2001, the MuseumsQuartier Wien finally opened. It has since developed into one of the largest complexes for art and culture in the world.