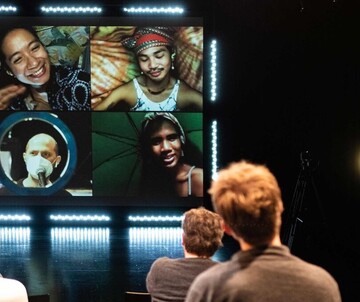 Eisa Jocson addresses the psychosis that is at the heart of separating the human from the animal.

In Manila Zoo, the final part of her HAPPYLAND series, Eisa Jocson continues her exploration of Walt Disney’s empire of happiness. Similar to Princess, shown at TQW in 2018, the starting point for this performance will also be the role of Philippine entertainers at Disneyland Hong Kong. Disproportionally used to portray animals and objects, they serve the well-tuned machinery of family entertainment. Highly qualified, world-class machines of happiness bursting with energy. Anthropomorphised animals modelled on US-American values and life styles. Lions are kings; monkeys, crickets and fish are there to fetch and carry for the human visitors.

Together with German electronic music composer Charlotte Simon and four Philippine performers, Jocson will look at the intersection of human and animal, of spectacle, work and isolation. Together, they will seek out moments in which private and public, the real and virtual, happiness and horror are indistinguishable. In this piece, Eisa Jocson will address the psychosis that is at the heart of separating the human from the animal. Who can move freely, even across borders? Who is forced to stay at a certain place, in a restricted area? Such questions are ever more relevant in times like these.