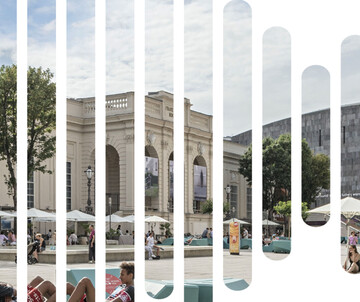 Did you know just what a diverse range of sounds Austria has to offer? Dive into a world of enchanting and virtuoso sounds in MuseumsQuartier Wien, and get a few visual surprises, too.

You just need a smartphone, the free app “Artivive” and an internet connection. Open the app and point your phone at any of the posters from the eight participating cultural institutions – Architekturzentrum Wien, Dschungel Wien, Halle E+G, Kunsthalle Wien, Leopold Museum, mumok, Tanzquartier Wien,  ZOOM Kindermuseum and the one at the MQ Main Courtyard – and set off on a journey through Austria‘s world of music.

“So klingt Österreich” (“This is the sound of Austria”), an initiative of MuseumsQuartier Wien and the Austrian National Tourist Office, transforms public spaces into audio-visual experiences. After the kick-off at MuseumsQuartier Wien, other locations will follow.