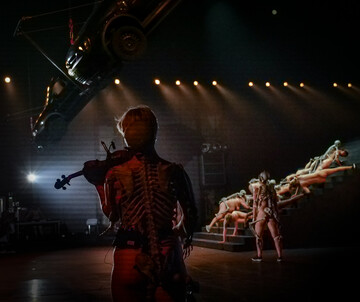 “Death is not the worst thing that can happen to women.” – Loosely based on Plato

Conventionally, Dante’s Divine Comedy is divided into three sections: Hell, Purgatory and Paradise. What heaven is for one might be hell for another – this divine comedy places heaven and hell all at once in the present moment, erasing the differentiation that we can find is so deeply rooted in our life and culture. For this show, Florentina Holzinger has brought together an all-female cast of performers of all ages and different physical, musical and athletic talents to bundle forces in an exploration of the human negotiation of life and death. Starting point is an 80-year-old dancer’s reflection on her life and century-spanning career and the planning and rehearsing of her funeral within this divine comedy. Assisted by two dance teachers, she sends the performers cascading through casting, dance class and training settings, exploring the sujet of the medieval ‘Dance of Death/Totentanz’, which was revived by German expressionist dancers in the 1920s. Inspired by this visual art and dance motive, the performers go on a journey to mirror and explore tensions within their own reality in relationship to gender, aging, sexuality and death. A possible spirituality of the 21st century: In an operatic celebration of life and death, music and dance join forces as art practices that aim to transcend.

This Divine Comedy digests humanity’s struggle with its short lifespan, the dualistic relationship of Thanatos and Eros and an (inefficient) inter-generational transfer of knowledge and wisdom. The life of a dancer as a journey of self-discovery and preparation for one’s own finitude: training, self-optimization, endeavours of beautification and health improvement – in competition and cooperation – aim to inspire the best in humanity despite its shortcomings. Death becomes her!