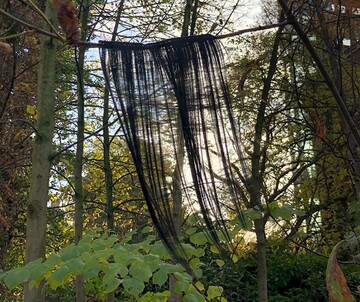 The jungle is a new and infinite territory, where the possible has a different meaning, or perhaps none. From which side can we enter the jungle, to taste this dream? Mowgli is the new creation of Iranian artist Sorour Darabi. The starting point of their work is the very title, taken from a recent song by French rap duo PNL, where the reference to the jungle denounces the still prevalent projection of wildness onto the body of young citizens with a migrant background. And yet, the image of the jungle also gives the opportunity to re-appropriate from within: the possibility of inventing a different law, opposed to the one of the city. Set in the obscurity of a fictional night, each appearance in Mowgli is a wild experience: choreography, poetry, storytelling, The Jungle Book, the lyrics of Iranian singer Googoosh and those by PNL. Through them, Sorour Darabi construct a collection – or almost an album – of lived and fantasized stories, blending the themes of chosen family, melancholy and urban legends. Step by step, they transform the stage into a jungle, and the jungle into a playground for the self. Becoming wild is a political project.

After the premiere at this year’s Kunstenfestivaldesarts in Brussels had to be cancelled due to the coronavirus, Mowgli is now celebrating its world premiere at Tanzquartier Wien.