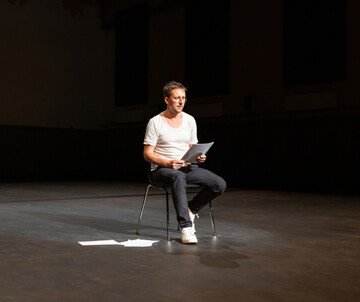 ‘Wherever fear prevails, bodies retreat and silence reigns.’ At the invitation of the Wiener Festwochen, the author, director and curator Boris Nikitin, is presenting two pieces in this year’s edition. Both are based on a dramatic personal experience: the death of Nikitin’s father in 2016 from the neurological disorder ALS. Underpinning the solo performance Versuch über das Sterben (Attempt on Dying) is a minimalistic theatrical arrangement. It is a tender interaction with language that combines biography with fiction, and personal experience with reflection. The modest yet urgent intimacy of this evening of theatre is moving, with Nikitin allowing the audience to join in his contemplation. He reflects on his own coming-out by analogy with his father’s confession that he no longer wished to go on living. Two testimonies that reveal publicly a sense of vulnerability, that understand the ‘vulner-ability’ as a revolutionary ability. ‘It’s like stepping out into a void. All of a sudden something becomes possible.’