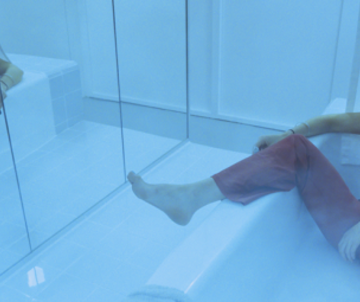 For the last three years Loretta Fahrenholz has been working on the feature-length version of Two A.M. (2019) which will now be shown in Vienna for the first time. Two A.M. is a hallucinatory tale of coercion, control, and peer-to-peer surveillance on the fringes of present-day Berlin. Fahrenholz draws on Irmgard Keun's 1937 novel, After Midnight, for her protagonist, Sanna. Where Keun's young narrator turned a septic eye on the rise of the Nazis in prewar Germany, Fahrenholz's Sanna is pitted against her own overbearing family of mind-reading 'Watchers,' who use their powers to monitor the thoughts and feelings of their human counterparts. As a police state tightens its grip in the face of increasing social unrest, Sanna goes on the run from her volatile Watcher aunt and reconnects with her sister Algin, a blacklisted pop star. But when an escape from her claustrophobic past seems just within reach, events conspire against Sanna and her allies, in an unpredictable fever dream of desire, voyeurism, and political chaos.

Presented by Loretta Fahrenholz, followed by a conversation with Sabeth Buchmann

Sabeth Buchmann lives in Berlin and Vienna. She is an art historian and critic and professor for modern and postmodern art at the Vienna Academy of Fine Arts. Together with Constanze Ruhm and Ilse Lafer she curated Putting Rehearsals to the Test (Montréal, 2016), also featuring a work by Loretta Fahrenholz. A publication was released under the same title (2016), and previously a program series at mumok cinema (2013) took place.