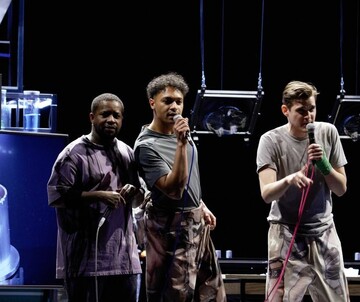 Richard Wagner’s Der Ring des Nibelungen is a monster of an opera. What to do with this gigantomaniac composition and its ideological implications? For his Wagner disaccord, author Necati Öziri, whose pieces seek to reassess the Western theatre canon, identifies the relations of oppression inherent in the work and contrasts the heroism with intimate yet powerful counter-narratives of protagonists who allow themselves to be vulnerable. Thus those who, in Wagner, have no voice find their own language and embark on a search for an ‘us’ that is not tantamount to the smallest common denominator. As music directors, Black Cracker and Jonas Holle have cast their Ring orchestra with eight contemporary pop musicians and arranged their counter-compositions to create an exceptional soundtrack to a polyphonic stage production. For the director Christopher Rüping, already a two-time recipient of the Nestroy Theatre Prize, his first ever exploration of the opera repertoire is also his first work to be presented to a Vienna audience. This new Ring explodes the Gesamtkunstwerk, allowing a diversity of perspectives to interact with one another.