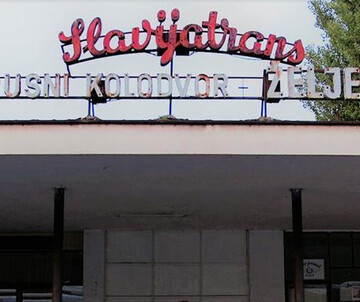 Making an object based on a photograph involves adding dimensions such as space, time and continuity. Skewers, hairpins and nails were the tools of self-liberation in Karin Mack’s 1977 photo series “Zerstörung einer Illusion,” which was produced with a self-timer and processed manually in a darkroom. Forty years after its creation a new perspective transforms examination of the prevailing self-image and belief of women’s role at the time into a three-dimensional object and sets it in motion. Light and rotation create an illusory perceptual horizon that’s inherent to filmmaking and make the living shadows dance in the delirium of the real.

Erna and Dževad own a cafe at the Sisak bus station, next to ironworks that used to be one of the largest in Eastern Europe. The film follows the encounters and conversations of the cafe’s customers one week before the foundry would close for good. The main topic of their discussions is Germany—a new heaven of Earth for these members of the former Socialist working class.

www.frameout.at
in cooperation with MuseumsQuartier Wien