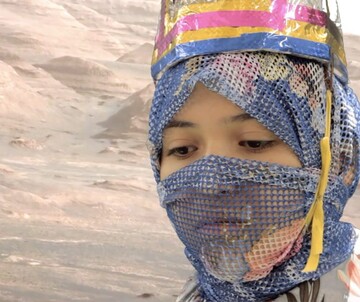 “These dances are in fact creative social devices to visualize and intervene into socio-environmental relations, stressing the interdependence between all life forms in this mountainous region.” — Alessandro Questa

Climatic Dances is the name of the fifth volume of the Endangered Human Movements* series, a long-term research carried out by choreographer Amanda Piña on the current loss of planetary cultural and biological diversity. It is inspired by two dances from the highlands of Puebla in Mexico, danced by Masewal people, in a context of climate change and mining exploitation. These two dances, Tipekajomeh and Wewentiyo, constitute the beginning of a trip towards the depths of the mountain and towards the re-enchantment of what modern science called geology. Amanda Piña explores the ways in which notions about the Earth have changed over time and through different historical genealogies and ontologies. In this piece, the artist’s biographical landscape, a particular mountain in the Central Andes in Chile, now destroyed by neo-extractive forces, becomes a place from where to share grief and anger, to mourn and to stand up.

* Endangered Human Movements is the title of a long-term project, started in the year 2014, focusing on human movement practices which have been cultivated for centuries all over the world. Inside this frame a series of performances, workshops, installations, publications and a comprehensive online archive are developed to reconstruct, re-contextualise and re-signify human movement practices in danger of disappearing, aiming at unleashing their future potential.