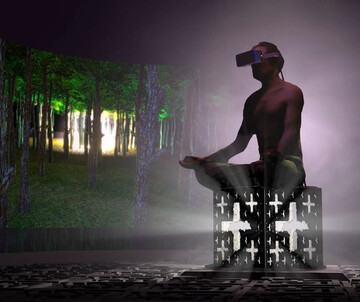 The creation of the world as a video game? Stage director Susanne Kennedy is today regarded as one of the leading voices in German theatre. Her trendsetting visions of the theatre are elaborated from perception-altering media, exploring the ambiguities that lie between reality and virtuality. It’s all just a game. So is the fun then over once we’ve lost one of our lives, or our life? Based on the rhythm of the creation narrative, Ultraworld addresses the question of how there can be anything out of nothing? Characters thrust into the (virtual) world become caught up in recurring configurations and looped conversations. Kennedy triggers the collapse of time in its forward progress within a sci-fi setting designed by visual artist Markus Selg. Actions collide with the rules of the game. ‘Now that you have been reminded of your own mortality, what are you going to do with the rest of your life?’ Kennedy’s works transcend the traditional machinery of the theatre, the logic of time and space, of character and plot. In Ultraworld it’s do or die: ‘Evening came, and then it was morning’, time and time again.