Markus Guschelbauer in conversation with EIKON

Nela Eggenberger: Landscapes, especially the abstraction of landscapes, are a dominant topic throughout your work. Where did this interest originate?

Markus Guschelbauer: This topic is definitely related to my biography. As a ‘farmer’s child’, I enjoyed both the advantages and disadvantages of living in the countryside, and therefore developed sort of a love-hate relationship towards it. As a child, it’s amazing when you get to play there, but it becomes exhausting when you have to help with the farm work. And the older you get, the more difficult it becomes to cope with many still existing conservative mindsets.

Anyhow, I generally have a great longing for nature. To me, a landscape is something romantic and sublime, that’s why I have this desire for untouched sceneries – which do not really exist anymore. I am chasing a fantastical construct. I have always loved to observe, and the camera catches a moment and conserves it in a photograph. Generally, I like it when nature radiates something monumental, imposing, like the photographs of Ansel Adams. That’s what fascinates me about landscape photography, but at the same time I feel that it is not enough for a real representation of nature. That’s why I add my subjective actions in the form of installations. This combination makes it difficult to say whether my work should be considered photography or land art, it’s none of these two and both at the same time. Regarding the process of abstraction, I haven’t abandoned pure depiction, and I haven’t arrived at complete abstraction. I’m still on a path, probably at the same time leading to a societal development and attitude towards nature, and I’m excited about where it will take me.

NE: With your installations for Symbols & Signs, you obstruct the view of the landscape, and the exhibited works could have easily been produced digitally. Why did you choose to go analogue?

MG: For me, it is important to go into nature and to find a performative experience there. I look for untouched nature as well as for cultivated landscapes in which I can integrate geometrical forms. For the series Symbols & Signs, I would also interpret these forms as a representation of humankind, since you cannot imagine nature without it anymore. These installations in red, black, white etc. are placeholders for human beings and become the main object of the picture, with the once seemingly endless landscape being pushed to the margin. Even the picture format is determined by the form of the object, and the frame adapts to the motive.

NE: At the same time, you get some kind of forest of signposts, and the images almost seem like encrypted messages which can or cannot be decrypted. I find this interesting because you once told me that you didn’t enjoy talking about your work very much. Can these symbols and signs be read as a form of protest, as an attempt to escape interpretation?

MG:  I often feel like everything consists of language exclusively these days. (Still, I do not mean to deny the importance of language). Personally, I can express myself much better through pictures. I like the ambiguity of pictures and I prefer to escape a clear interpretation. The forms in Symbols & Signs play with this symbolism. They might remind you of traffic signs or prohibition signs, which adds an absurd element because you can’t find a message on them. At the same time, the works can be read as a satirical comment on the ‘sell-out’ of landscape, which is promoted with titles and badges, for instance in tourism advertising.

NE: Is there something like an ideal landscape for you? Or to put it another way, which do you prefer: a lot ‘going on’ or almost nothing?

MG: I like vastness and emptiness, which is rather abstract to our viewing habits, as I have found it in Iceland, for instance. Another example are the deserts and salt lakes of Nevada, or simply the view of the ocean. But at the same time, I do enjoy abundance a lot, the way you have it in forests, for instance. Every kind of landscape has something special, even the monoculture farming landscapes surrounding Vienna. It doesn’t have to be untouched nature, which is hard to find anyway, since humans have already been everywhere. 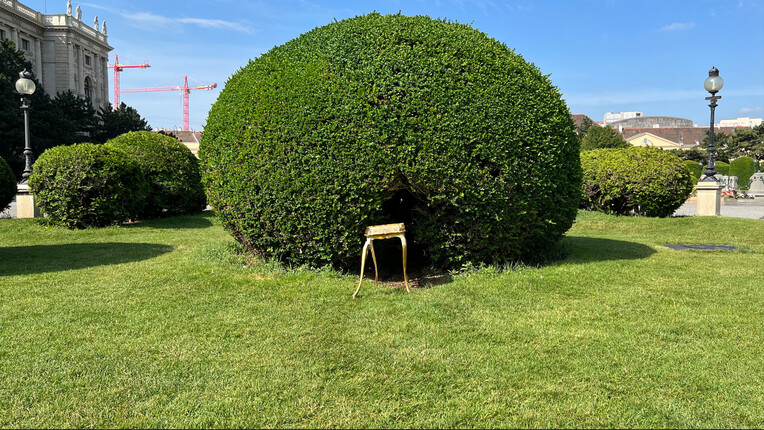