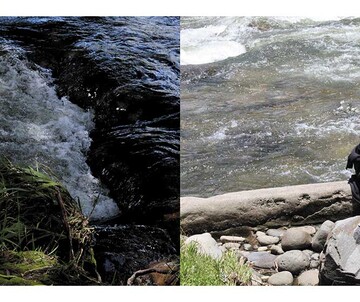 Participation according to the current COVID-19 regulations

As part of the group exhibition Overground Resistance.
The presentation by A4C - ArtsForTheCommons will focus on ongoing research on rights of nature and urban resistance based on works and videos shot in various locations (Ecuador, South Korea and Italy) and on “Vilcabamba – de Iura fluminis et Terrae”, which will appear in the 2022 Sydney Biennale.

“I am not proposing a return to the Stone Age. My intent is not reactionary, not even conservative, but simply subversive. It seems that the utopian imagination is trapped, like capitalism and industrialism and the human population, in a one-way future consisting only of growth. All I’m trying to do is figure out how to put a pig on the tracks”
- Ursula K. Le Guin

A4C - ArtsForTheCommons is a collaborative platform that intends to bring together artists and activists on issues related to migration, borders, ecological justice and extractivism. Founded by Ecuadorean artist and activist Rosa Jijón, and Italian activist and researcher Francesco Martone it has started its activities focussing on human mobility, Mediterranean cartographies and decolonial narratives, with installations and performances in Rome, Quito and Slovenja. In 2019 A4C published a book on migration and contemporary arts for the Italian publishing house ManifestoLibri, titled “Dreamland, i confini dell’immaginario”. The book was then presented in various occasions with the participation of academics, art critics, curators, artists and activists on migrant rights, including the Captains of Open Arms and Mediterranea rescue vessels.

In the last few years A4C’s research focussed on the effects of extractivism and globalization, and in particular on “extrastate” spaces, such as smart cities. This work, carried out in Korean smart city Song-Do in over three years has produced one initial exhibition in the Bienal NOmade of Guayaquil, Ecuador in July 2021. Titled “Have a wonderful time” the work  will then be showed in Quito in October. Its purpose is to depict how the exponential expansion of global finance and speculative bubbles is altering borders and landscapes, turning nature into a commodity and land into an asset to exploit and monetize. Ancestral connections between communities and places are re-elaborated to provide room for the establishment of free trade zones, immaterial and autonomous administrative forms that transcend the sovereign legal systems and create new bodies and territories, physical and conceptual.

Furthermore, Song-Do is considered and boasted as the showcase of “green economy”, built at the cost of the displacement of a delicate ecosystem where as many as 11 species of migratory birds, among which the “Platalea Minor” used to live, a site of major importance for the Ramsar convention. Zero emission powerplants turn sea tides into energy, destroying fragile coastal habitats. What sort of wonderful time is possible in a smart city, or more simply does a smart city consider the concept of time? In the next 70 years Song-do will be replaced by more futuristic projects, already displayed in the IFEZ museum. And then 70 more years will be needed to give a new “soul” to the city.  The concept of time is therefore altered in a smart city, since the future in pure neoliberal terms needs to be predictable, planned from above. However, as the Necronautical Manifesto puts it: “time is, and always has been, out of joint—a formulation that throws all teleology, suddenly and massively, into reverse. The past is not past, the future folds back upon itself, and the present is shot through with fluxions of past and future that destabilize it”.

“Have a wonderful time” is generated from an act of activism of one of the two authors that traveled to Song-Do many times in the last years to support indigenous peoples’ delegations attending the meetings of the Green Climate Fund, whose headquarters are in Song-Do.  In his frequent travels, the author engaged in explorations of the city under construction, that literally grew under his eyes and gathered materials, souvenirs, propaganda brochures, images, photo, video, and sound.  His body challenged the structure of the smart city, through a sort of “flaneur” in a space that inhibits all sense of navigation, and space awareness, as well as the capacity to wander and experience the urban space randomly.

Small details that seem insignificant to the many emerged, offering critical paths of exploration. An Ecuadorian flag on a black limousine parked by the central headquarters of the Incheon Free Economic Zone’s government, unveils the story of the failed dream of exporting the smart city model in the Ecuadorian Andes, with the City of Knowledge, Yachay. The gardeners that mown the lawns in Song-do Central Park, the electricians fixing a neon sign on one of the remaining bars of the Old town, two elder women harvesting herbs under the newly built high-rises. The resistance of a group of activists to save migratory bird species impacted by the construction of the city. They all disappear in this segregated space where those that carry out the day-to-day work to maintain the city are made invisible. Acts and signs of resistance or existence bring to light what the smart city by its very nature, makes invisible. A group of students playing football “hack” the smart city through recreation, candles lit in a Buddhist temple recall a past that seems to have gone forever.  Their acts and the act of bringing them to light are subversive in both political and aesthetic terms.

The same happens when “hacking” current technologies such as GIS and GPS with reference to territories under attack by the expansion of extractivism on fragile ecosystems that are home of endangered species and where indigenous peoples and communities have been living in harmony for immemorial times. Territories and locations that are just markers on maps traced by GIS and satellite imagery to identify new sacrifice zones or areas of expansion and extraction.

Geography, and geospatial techniques (including in more recent times GeoPositioning Systems such as GPS) have always been disciplines related to colonialism, to the urge of a global elite, initially European, to gauge the planet. Geospatial instruments have been used since the 15th century to redefine territories to put under European control and domination, while maps have been a tool to impose slavery and grab lands in far-away territories, while expanding colonial and capitalist domination. A domination that followed different phases, from genocide, to extraction of materials, to the expansion of monocultures. Up to the colonization of Nature, and the dominance of a unique anthropocentric epistemology that denies the right of Nature and ecosystems to thrive, survive and reproduce. It is what Macarena Gomez-Barris describes in her “The extractive zone, Social Ecologies and Decolonial Perspectives” as  “digital and technological colonialism” in which “surveillance, data mining and the mapping of resource-rich territories work together as complexity interlinked, and these coordinated forms of dominance function by mapping resource-rich areas of the world and serve as visual gateways for multinational and international state investment in extractive industries.”

Parallel to the official “geography” and cartography, critical and alternative uses of geo-positioning and satellite systems have gained ground among indigenous peoples’ communities that “hack” the dominant mode of cartography, spurring a significant process of decolonization of mapmaking. Its purpose is that of “unveiling” histories of a place to revisit the dominant perspective upon which the world is represented.  Critical geography and cartography assume a decolonial perspective and purpose based on the agency of those “until then subaltern” communities and peoples that appropriate themselves of those technologies to offer a different worldview, where maps are composed of scientific and traditional knowledge systems, cosmologies, and collective traditional livelihoods.

Spurred by the World People's Conference on Climate Change and the Rights of Mother Earth that took place in Cochabamba, Bolivia in 2010 and on the basis of the Universal Declaration on the Rights of Mother Earth thereby adopted, social movements, communities and academics have started to develop and implement legal instruments for the recognition of the rights of Nature, the so-called Earth Jurisprudence. Building up on the unprecedented inclusion of the Rights of Nature in the Ecuadorian Constitution and in Bolivian legal systems, and of legal actions seeking the recognition of legal personhood of endangered ecosystems, a global movement has been taking shape. First in New Zealand with the Whanganui river, and in Ecuador with the Vilcabamba river, as well as in Colombia first with the Atrato river or in Bangla Desh and India with the Yamuna and Ganges, rivers and watersheds have been granted legal personhood or have been recognized as living beings with their own rights. A universal declaration on the rights of rivers was also developed, and global coalitions such as the GARN (Global Alliance on the Rights of Nature) been established. The Cochabamba summit also set up the International Tribunal on the Rights of Nature, that has been analyzing many cases in its sessions this far. Still, it is with rivers and their rights that the drive to develop systems of law, and new categories or rights, that complement the traditional anthropocentric human rights systems with a more biocentric approach, has been spearheaded.

Reinterpreting a space and an ecosystem using GPS in a critical way as indigenous peoples do with critical cartography and at the same time reproduce those spaces in such a way that these can be reassembled in a new wholeness can provide a potential new vision of the world’s different worlds. Transforming those coordinates into sound, and then notes and then into a composition to be played is meant to unveil a different reality from what is normally identified by the use of GPS coordinates and a potential for alternative ways of looking at the relation between humans and the rest of the living. Hence, “hacking” an instrument used to colonize a territory offers a possibility to decolonize and de-humanize nature and narrate a different story, that of ecosystems in their complexity and their intrinsic rights.

Two other recent A4C-Artsforthecommons works relate to urban struggles against extractivism and are ideally connected. The first is a video shot in Pacto, Ecuador, in the urban territory of its capital city Quito, at a permanent presidium against gold mining and in occasion of a demonstration in Quito to call for a citizen consultation against mining in the Andean Chocó. The Ecuadorean constitution recognizes the right to resistance, the rights of Nature and the right to public consultation, all three invoked by communities in resistance. The second is a performance, organized together with Italian arts collective Stalker, and that took place at the Ex-Snia lake in the outskirts of Rome when the declaration of the rights of the Erie lake was read. The lake emerged spontaneously in an area originally occupied by a synthetic textile factory and then squatted by local movements. Since then it has been flourishing with biodiversity to become the only urban lake in Rome, and at the same time threatened by the expansion of speculative interests. The same days the video at Pacto was shot, movements in Rome were blockading bulldozers trying to fell trees and prepare the ground for construction. The  Forum Territoriale Parco delle Energie of the Ex-Snia lake is now working to protect the lake and towards the recognition of its legal personhood.