Under Pressure - On Forms of Authority and Decision-Making Power

Under Pressure - On Forms of Authority and Decision-Making Power 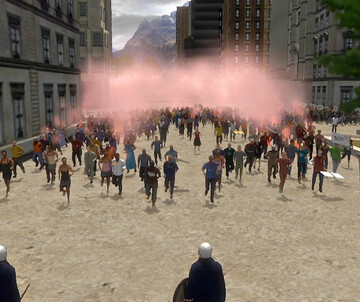 The exhibition looks at the mechanisms, strategies and tactics that are used to restrict decision-making freedom, and the way security/protection, economy/finance, nation/cultural identity or the declared necessity of competition and efficiency are defined and fixed as decision premises. Proceeding from the dogmas of neo-liberalism and neo-nationalism, the exhibition is concerned with authoritarianism in politics, the economy, technology and art. The marginalisation of the political driven by neoliberalism, as well as the financial crisis, have led to an accelerated authoritarian capitalism. Authoritarian neo-nationalism, on the other hand, can be seen as one reaction to this development.

On the other hand, control over future decisions and actions, as well as influence, are the goal of pre-emptive algorithmic systems and forms of government. Information technology anticipation and technical assistants, such as Siri, Cortana and Alexa, internalise action programs and the ‘needs’ of users, and either anticipate or make decisions. Data analysis, the creation of profiles – these things aim not just to guess at but also inform our future decisions through technical systems.

But for now efficient machines (automation) compete with people, not just in terms of work itself, but also in making decisions. What are the consequences of transferring decision-making power to neuronal networks? Are we at risk of having our scope for action and thinking increasingly controlled and programmed through surveillance, Big Data rankings, social credit systems etc., and are we on a path that is leading us to digitally structured totalitarianism? Without us noticing, scope for decision-making and responsibility is disappearing in the disintegrating action continuities of the real and the virtual (hyper-reality).

This exhibition investigates dispositions of decision-making as well as forms of involvement and complicity in authoritarian political and algorithmic systems. What decisions will be required of us, how will decisions be automated, in what form do we ourselves consciously or unconsciously contribute to economic, algorithmic and state systems making decisions for us, and to what extent are we ourselves acting in authoritarian ways? When algorithms know more about us than we know ourselves, does this mean they can decide on our respective needs in a more rational and thus more appropriate way, and what does that mean for the conception of the autonomous self?

Could the resulting marginalisation of the subject (or the disengagement of subjectivity from subject, persona and person) bring an opportunity to effect change, and prevent authoritarian tendencies, or should we fear that this will merely displace or automate them, without ridding us of them? New dispositions are emerging in art by their questioning of the subjects of artist, curator and observer. Whether authoritarian structures in the art system are thereby abolished or only shifted remains speculative. What new forms of collaborative decision-making processes do we need?