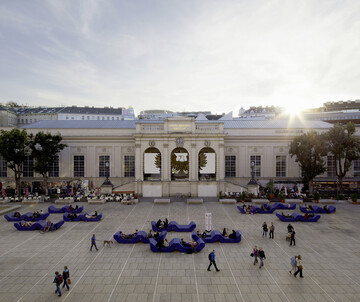 Ekaterina Degot is an art historian, art writer and curator. Born in 1958 in Moscow, she has worked in various Russian art and cultural institutions i.a. as the director of Tretjakow gallery in Moscow. In addition to her curatorial practice she has been active as a cultural journalist and author since the 1990s. Between 2008 and 2012 Degot was the co-editor of online cultural magazine openspace. Additionally she is a regular contributor for magazines like Artforum, Frieze and e-flux.
After a four-year tenor as the artistic director of Akademie der Künste der Welt in Cologne she has been the director of steirischer herbst in Graz since January 2018.

Under the title “Volksfronten” this year’s festival is supposed to critically examine the phenomena of culturalisation and identitary hardening of current political and economic lines of conflict. Steirischer herbst wants to confront the generally posited “clash of civilisations” with a model of art which resists “the idea of multiple cultures”. According to Degot “culture is supposed to bring people together instead of dividing them through different ‘identities’”.

In a conversation with Nicolaus Schafhausen she will provide insight into her curatorial agenda in the context of steirischer herbst and outline her approach to re-politicizing the cultural.