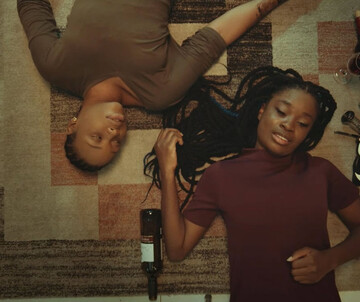 Afro Rainbow Austria (ARA) is the first organization established by and for African LGBTQI+ in Austria. ARA is aimed at supporting and promoting the visibility of queer Africans by creating a communicative and interactive platform. ÌFÉ (2020, Uyaiedu Ikpe-Etim) and I AM SAMUEL (2020, Pete Murimi) are two films that sheds light on queer African love and resistance. The films also touch on the deeply engraved aftermath of colonialism and the continuous struggles of queer African folks existing in systems, societies, and countries that are violent towards them and their queerness.

NO PRIDE IN DEPORTATION

Ìfé
NG 2020, 38 Min, short, OmeU
Regie: Uyaiedu Ikpe-Etim
Ìfé is preparing for a date. As she’s getting ready, a reggae-infused ballad plays in the background and the lyrics “How I wish Mama would not have to cry when she finds out my love is on the other side”. When Ifé opens her front door, on the other side she finds Adaora.
ÌFÉ is a love story about two Nigerian women who fall in love over a three-day date, bond over their love of poetry, recite a Warsan Shire poem out loud, playfully bicker about whether listening to an audiobook is as good as reading, and open up emotionally to each other. But their love is soon tested by the realities of being lesbian in Nigeria.

I Am Samuel
KE, UK, DE, US, NL, CA, ZA 2020, 69 Min, Fiction, OmeU
Regie: Pete Murimi
Samuel grew up in the Kenyan countryside, where tradition is valued above all else. He is close to his mother but his father, a local pastor, doesn’t understand why he isn’t married yet. After moving to Kenya's capital in search of work and a new life, Samuel falls in love with Alex and finds community and belonging. Their love thrives despite the fact that Kenyan laws criminalize anyone who identifies as LGBTQ+. Despite threats of violence and rejection, Samuel and Alex move between their co-existing worlds, hoping to win acceptance in both.