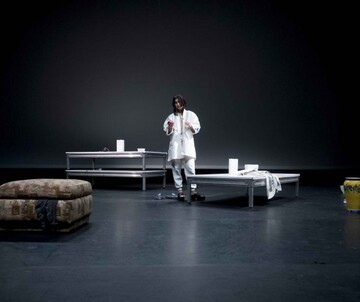 She is staying at a four-star hotel spa in a godforsaken part of Croatia among a group of people seeking happiness. Everybody in this group has a status: as she is new, she is automatically designated a DOG, with the number 23 – she is the 23rd dog.

The members of the group don’t know one another but share advice, their beliefs and customs. They are quite convinced that they live in an EXTREMELY LIVELY world, life ad infinitum. Anne Lise Le Gac invites us to a conversation. She takes us to subterranean worlds, introduces us to marginal customs, pirate love and crossbred species.

* Featurings are not really works in progress but rather chapters of a novel or instalments like ALIEN 1, ALIEN 2, ALIEN 3 or like episodes of a TV show.

And for now, each of them is presented separately because each featuring lasts between 50 minutes and an hour.

In the chronological order they were written, there are