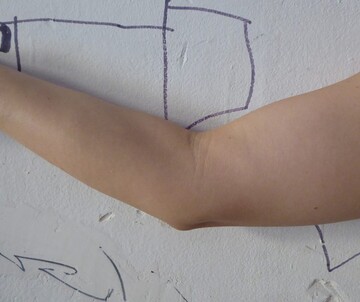 “It seems to me as if only a poetics of relationship, i.e. something created by the mind, something that exists in the imaginary, can help us to understand the phases and entanglements in which the peoples find themselves in today’s world.” — Edouard Glissant

The formal and content analysis of the relationship between movement and language is at the heart of Anne Juren’s artistic practice. Juren’s choreographies take the form of experimental sessions with guests. The spoken word generates a creative space that transfers the choreography directly into the bodies and the imagination of the spectators. In her solo, Anne Juren focuses on dysfunctional relationships, absurd phantasms and unimaginable acts, and translates them into movement. The work explores both the relationship between the body and its representation and the “poetics of relationship” – a term coined by literary theorist Edouard Glissant, which describes a mode of thought and action based on the imaginary. In the process, Juren attempts to broaden the concept of choreography. The theatre itself as a place of representation is conceptualised as a space of poetic relationship between performers, dancers and the audience, as an imaginary platform where the body and the mind, the real and the invisible, the private and the public come together and jointly create a phantasmagorical anatomy.