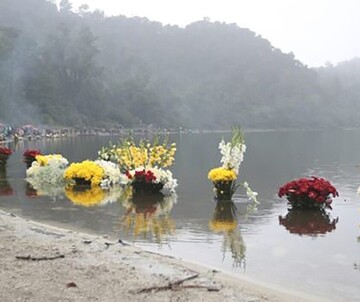 The School of Mountains and Water

With Mountains in Resistance – The School of Mountains and Water, Amanda Piña continues her long-term research into the ongoing loss of our planet’s cultural and biological diversity. The three-day program will include lectures, discussions, and installations at TQW Studios as well as a bus tour followed by a performative parcours and a workshop in the mountains. The potential interplay of art, indigenous knowledge, activism, and scientific research is at the heart of the choreographer’s work. Similar to Climatic Dances, this project will also try to redefine the relationship between humans and mountains in the context of indigenous knowledge practices from the Americas.

Mountains in Resistance is conceived as a school of unlearning the modern/colonial idea of the Human as pre-existent and separated from that which sustains its life, proposing connections of care between human bodies and bodies of mountains, glaciers, and water. It is therefore key to recognize mountains as living bodies, active in the reproduction of water as life. The School’s Vienna iteration taps into the history of the First Vienna Mountain Spring Pipeline, entangling past struggles for the democratization of access to safe drinking water with current ecological concerns, also raising the question of whether the city’s water supply is as endless as it seems.