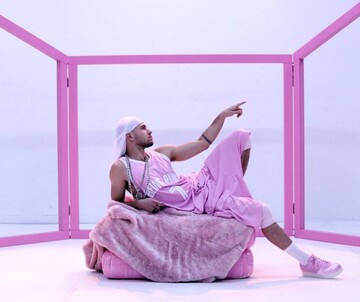 Gangstas, Pimps und Hoes: The US rap world is imbued with images of exaggerated masculinity. When Black artists such as Cam’ron and Kanye West launched a fashion trend of pink plush, fur and velour in the early 2000s, they proved that even Barbie’s favorite color could not damage their image of heterosexual hypermasculinity. Joana Tischkau draws on this occasion to reveal the fragility of social constructions such as race and gender: To what extent are bodies of the “other” used to consolidate the structural power of white Cis masculinity?

Pink people wanna know if other pink people like hip-hop
How can it still be hip-hop?
That’s like asking, if Black people like
Dirty Harry
Is he still Clint Eastwood?
— Greg Tate