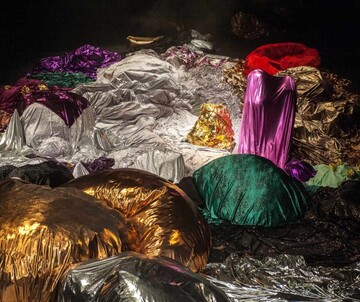 Yabba is a cosmos with its own order, its own rhythm and its own movement systems that invites you to enter a new logic. A hybrid of different technologies, an amalgam of entities in constant transformation in time that produce other things through coexistence and encounters with those who observe them. Things that transpose images – concepts, ideas and emotions that occur precisely at that moment of encounter with the entities of this deformed and changing cosmos. A kind of world that is everything and nothing, is full and empty, that takes all forms but does not yet have any. Yabba is right there, changing. It paints its own colours, it changes its shapes, it unfolds its materiality… This state of constant transformation proposes an attentive look: a look that pays attention, originating from its inability to name what it looks at. Yabba will be accompanied by Lanoche, a musical project by Ángela de la Serna, a mix of experimental electronics, ambient, deep house and atmospheric slow techno.