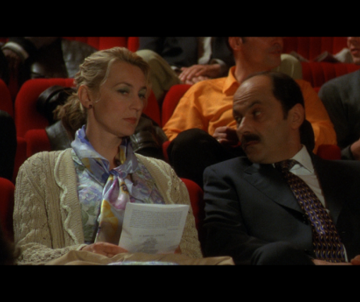 Manufacturer Castella wants to experience something different. With considerable financial means and few cultural preconditions, he flees his wife Angélique’s love of animals and country lifestyle into the world of the theater and painting. His encounter with the actress Clara becomes a struggle for dominance in matters of taste. Motivated by amorous curiosity and a disdain of each other’s tastes, the characters attempt to assert their own power and connoisseurship. Agnès Jaoui’s debut film Le Goût des autres (English title: The Taste of Others) is a confrontational illustration of the strict connections between the symbolic power of legitimated culture(s) and social class, in line with the thesis of Pierre Bourdieu’s Distinction: A Social Critique of the Judgement of Taste. The extent to which class-based taste determines cultural consumption to this day can still be fiercely debated some forty years after the publication of Bourdieu’s book, and will be discussed on March 13 in the mumok cinema. Who would like to watch a French film with English subtitles at an evening screening in a museum—do you want to experience something different?

Dr. Barbara Rothmüller is a sociologist in Vienna and the spokesperson of the educational sociology section at the Austrian Society for Sociology. Research interests: Pierre Bourdieu, social inequalities and discrimination, educational reforms.