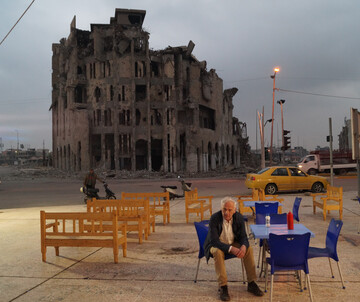 »It’s not just about portraying the world anymore. It’s about changing it.« These words set the tone of the manifesto written by Milo Rau for his term as the new director of the NTGent. The so-called documentary works of the Swiss-born artist, one of the most controversial and successful contemporary theatre makers and recipient of the 2018 European Theatre Prize, rub salt into present-day wounds. And they really do bring about change: The Congo Tribunal, for example, forced two ministers to resign. In Vienna, a city in which his stagings have rarely been shown to date, he will present a brand-new work at the Wiener Festwochen. In Orestes in Mosul, based on the ancient tragedy by Aeschylus, Rau sticks to his manifesto that states »literal adaptation is forbidden«. What interests him about Oresteia is the birth of a modern legal system. Only a trial leading to a possible reintegration into society can break the gory vicious circle of murder and revenge. Rau’s research has taken him to Iraq, where he uses the ient tragedy as a tool to delve into the current conflict: how can we deal with the violence in the Middle East and, more specifically, ISIS without falling into archaic patterns?