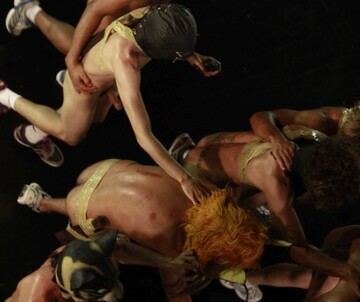 Life is a struggle for survival. This statement is often no more than an empty phrase, but the Brazilian choreographer and performer Marcelo Evelin manifests the existential reality behind it in Matadouro, a work he created in 2010 and which as lost none of its emotional yet provocative power since then. Eight dancers tirelessly circle the stage to the live interpreted String Quintet in C Major by Franz Schubert: an iconographic image that reveals the contrast between European notions of the beauty of art and the harsh reality of poverty and violence. Evelin has firsthand experience of this disconnect. He has been living in Europe since 1986 and has danced with Pina Bausch, among others, but still often travels back to his hometown Teresina, where he runs the CAMPO art centre. Matadouro is the last part of a trilogy based on the Brazilian epos Os Sertões by Euclides da Cunha, which follows the story of a group of separatists fighting for social justice. A powerful choreography showing a captivating struggle for humanity and dignity.