Guided tour by the curator / Hans Hollein unpacked: The Haas-Haus

Guided tour by the curator / Hans Hollein unpacked: The Haas-Haus 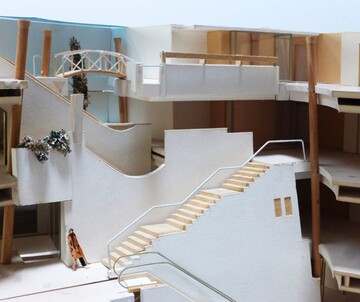 Even before and during its construction the Haas-Haus directly opposite St. Stephen's Cathedral caused many a controversy. On the occasion of Hans Hollein’s (1934-2014) 85th birthday we open up his archives and offer insight into the conception of what is probably his most famous Viennese building.

Initially commissioned as a conversion study, a new building, completed in 1990, proved more cost-effective. In the fourth episode of the Architekturzentrum Wien SammlungsLab series, a diversity of models and drawings show the genesis of the project considering urban analysis, extensive studies for the façade and atrium as well as the lettering and the colour of the site fencing. The abundance of preserved material provides an insight into the work process at Atelier Hollein. Discarded ideas, alternatives, different approaches, the references and the metaphors are revealed with a depth never shown before. Press reports document the at times intense debate.

In 2002 the five-storey atrium was removed while the building’s external appearance was retained. The Haas-Haus has been a listed building since 2012.

The Archive Hans Hollein
An extensive part of Hollein’s estate was acquired by the Republic of Austria in 2016 for the MAK, and has been entrusted to the Az W on permanent loan. Ever since, the ‘Archive Hans Hollein, Az W and MAK, Vienna’ has been accessible to the Architekturzentrum Wien for inventory and analysis. The exhibition not only examines the complexity of the design but also demonstrates the significance of architects’ estates in providing a deeper understanding of the culture of the built environment.