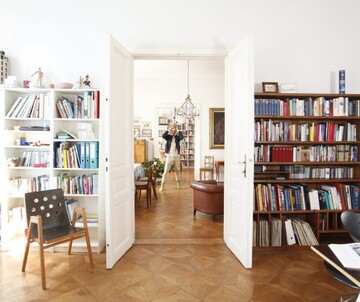 'The way we live' collective living experiment is now followed by the premiere of the documentary of the same title. What was it like swapping one's own four walls with strangers and to explore a new home environment? The filmmakers from Mies. Magazin were there.

In September 2019 the Architekturzentrum Wien extended an invitation to all cuty dwellers to travel within their own hometown. Around 70 Viennese locals undertook the adventure, meeting for a blind date and to hand over their keys. What is it like to swap the keys to your home with complete strangers and to rely wholly on the currency of ‘trust’? To what extent did the change of location alter and sharpen the way they viewed the city? What does a Gründerzeit fan do in a terraced estate on the outskirts of town, and what is living in municipal housing like for somebody from a shared apartment?

The documentary produced by Mies. Magazin accompanies three pairs of these home-swappers on their trip. After the screening, a distinguished panel the insights gleaned from this collective housing experiment.

‘The way we live’ project is part of the Stadtlabore initiative by the Executive Councillor for Cultural Affairs of the City of Vienna.