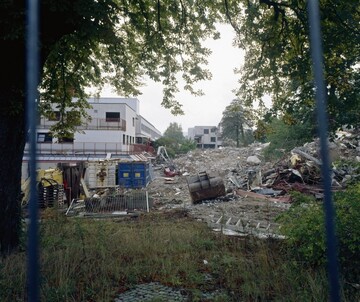 In the wake of the 1968 movement there was a shift in Viennese social policy. In the building sector this climate of change manifested itself in the opening of the Stadt des Kindes in 1974.

The complex by architect Anton Schweiger embodies the new guiding concepts of the welfare state: transparency and community. The shift away from the care concept towards a partnership-based approach was clearly illustrated in the housing of the children in family-like groups. Public access to the recreational facilities, like indoor swimming pool, gym, theatre and ceramics workshop, was representative of the social integration of the occupants in their local setting. The Stadt des Kindes became a model project for politicians. As a new model for the accommodation of “vulnerable” children and youths, the project remained an exception and did not realise its own goals. In 2002 it was closed, and largely demolished despite widespread protest. Two family homes, the swimming pool and the gymnasium were conserved and renovated. Over 250 apartments were completed on the grounds with its generous outdoor spaces between 2011 and 2013 (architects: Walter Stelzhammer, Peter Weber). The second Sammlungslab, dedicated to the Stadt des Kindes, brings impressive objects from the Az W Collection together with the memories of institutional critique from former residents, and raises the issue of the ambivalent relationship between architecture and social practice in many ways.