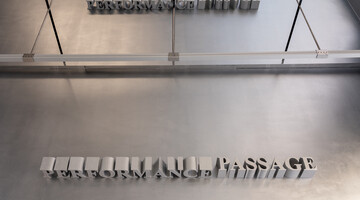 Q21 Backstage: In November we present the newly opened PERFORMANCE PASSAGE that serves as a Space for Poetics of the In-between at the passageway to the Tanzquartier Wien Studios.

Designed after the artistic concept of Christoph Meier, the PERFORMANCE PASSAGE appears doubled by an entirely mirrored ceiling. Just like in front of the wall of a dance studio or the ceiling of a discotheque anyone can be a performer here, anyone can observe themselves. The installation concept, conceived and curated by Andrea Maurer, aims for a situational intervention, expanding the mirrored space through a linguistic-experimental, poetic dimension. The programme starts with Gerhard Rühm and his picture cycle WOCHENSCHAU.

Christoph Meier: I am a visual artist working at the interface between sculpture and space. My original field was architecture. I studied architecture at the Technical University of Vienna (TU Wien), and sculpture at the Academy of Fine Arts Vienna and the Glasgow School of Art. In the academic year 2019/20, I was given the chance to head the research unit ‘Three-Dimensional Design and Model Making’ at the Institute of Art and Design of the Faculty of Architecture at TU Wien. Now, I have taken up the position of Senior Artist at the same institute.

Andrea Maurer: I live andwork in Vienna as an artist, predominantly in the contexts of performance, visual arts and, as of late, literature. After my formation in performance and choreography, I studied sculpture at the Academy of Fine Arts Vienna. Besides artistic activities, my work includes teaching at various art institutions, e.g. my last assignment was at the Institute of Language Arts of the University of Applied Arts Vienna. Performance Passage is my first long-term project as a curator.

CM: I work on every scale, I see every space a challenge, and my interests go beyond its limits. I consider my practice a platform within a broad field between art and architecture. Apart from numerous exhibitions in Austria and abroad, I have been publishing the artists’ fanzine BLACK PAGES with artists Ute Müller and Nick Oberthaler since 2009. Since 2016, I have been running the exhibition space Guimarães with Hugo Canoilas and Nicola Pecoraro in Vienna.

AM: I have just returned from Marbach, where I spent two weeks in a small cabin disassembling and re-arranging pieces of writing I was given by visitors – a poetic service which made me work into the tiniest parts of letters. Such stays often lead to very personal and funny encounters, allowing for a completely different art experience compared to museums or theatres. However, I often work on a larger scale, within and on spaces: exhibition spaces, theatre spaces or public space.

What added value do performances produce?

AM: I am rather sceptical regarding the term ’added value‘ and the categorisation of ’performance‘. If I wanted to apply a concept like ’added value‘, I would not consider it something measurable, but locate it in a sphere where this ’more’ or ’less‘ cannot degrade to a norm.

The new PERFORMANCE PASSAGE is…

CM: …a space whose design is reduced to a minimum. It is meant to be a stage, inspiring the visitors’ performative potentials by inviting them to interact with themselves, with their reflections. Performance Passage puts the performers at the centre and tries to avoid any kind of illustration. Instead, it reduces things to an essence and clearly dissociates itself from its extensively designed surroundings.

AM: …a space in space in space, and a passage at the same time. The temporal aspect plays an important role. The seven lightboxes are like a time machine where every score follows its own rules and develops its own duration. The curatorial setting of this lightbox keyboard focuses on the linguistic-experimental positions of artists who come from different fields but all develop their own individual poetologies.

The Literaturpassage is one of the open-access micromuseums in the MuseumsQuartier Wien, curated by JENNY, the literary magazine of the Institute for Language Arts at the Angewandte. In 2022, under the title From All Sides, as many sides of the literary world as possible will be illuminated. JENNY turns the pages, puts footnotes and marginal notes… 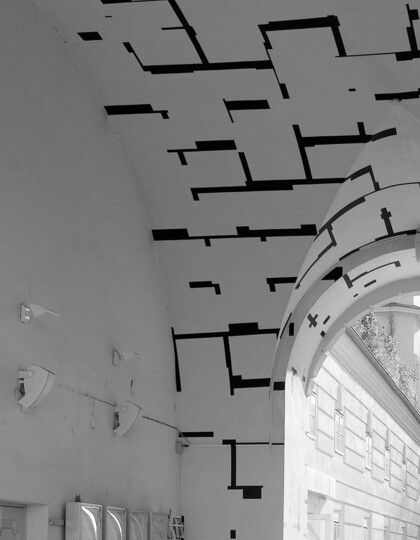 The series TONSPUR presents a changing selection of sound art pieces by international artists for the public space at MQ Vienna. Their multichannel sound installations overturn common stereo images and create walk-in audio spaces. Taking the physical architecture of the passage as a starting point, a virtual architecture is build from sound. 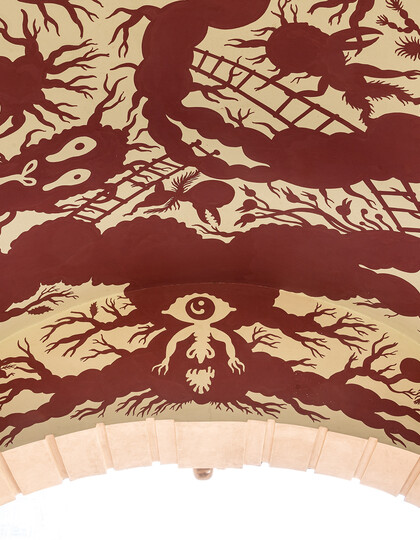 In the KABINETT comic passage located in the passage between Mariahilfer Strasse and Fürstenhof exhibitions dedicated to various forms of the combination of words and images (in common parlance: comics) are held. The passage comprises two and a half gallery spaces and a vending machine containing the publications accompanying the exhibitions. 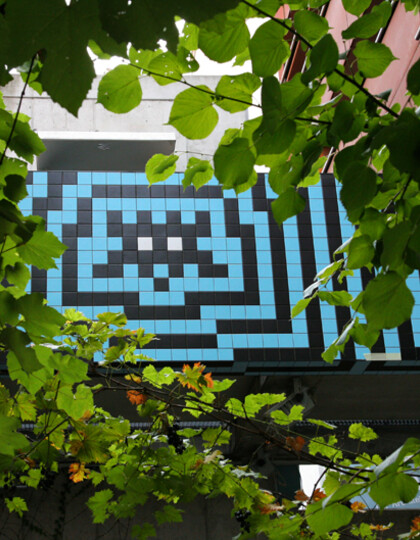 In this passageway an independent team of curators presents regularly changing exhibitions of international Street Art. The permanent design of the passage has been conceived by the renowned French street artist Invader. Each exhibition is accompanied by an issue of “betonblumen” magazine, which is available at a vending machine on site. Curator:… 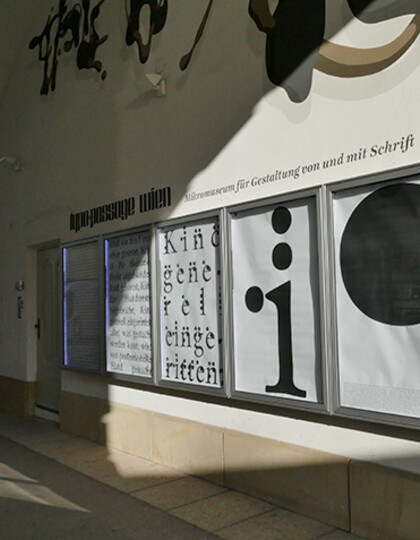 Typography is the design and use of letters, hence the design of content. Typefaces have always been created for a certain task and can never be considered in isolation of a purpose. Typography does not replace, but support–or else sabotage–content. Typopassage, a micro museum for design, exhibits reflections on cultural and social importance by… 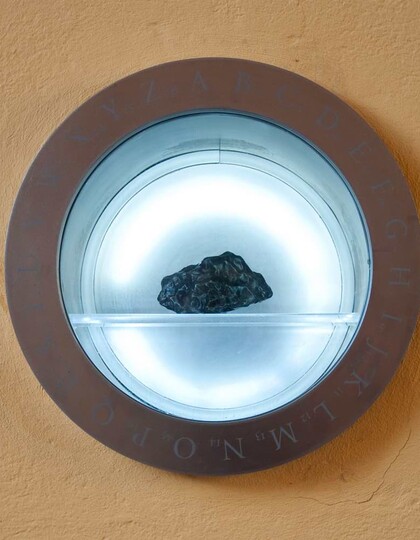 The Meteoritenpassage connects the MQ directly and symbolically with the neighboring Museum of Natural History. The central theme of the passage explores how present-day scientific museums evolved out of 18th- and 19th-century mineral collections and classification systems. Each poster from the on-site vending machine comes with a changing artistic… 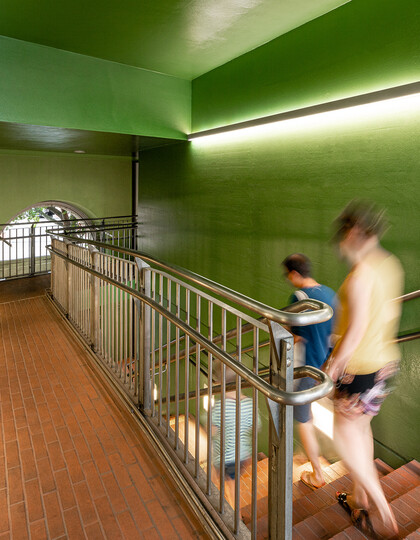 A passageway as a compact traffic tool: this narrow space features a staircase, a bridge,
a lift and several railings and doors. Artist Hans Schabus covered the walls and ceilings in hammer paint—a kind of varnish primarily used for the manu- facturing of machines. The colour reseda green creates a link
to Otto Wagner’s Stadtbahn (“Vienna… 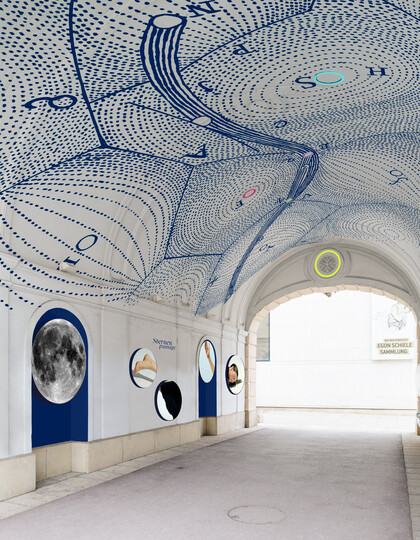 Sternenpassage highlights various artists whose work broadly relates to photography and illumination. It presents their works across four illuminated circular display cases on the walls, combining them with telescope images of outer space. The diagram on the ceiling dates back to the Baroque period and depicts a comet‘s elliptical path, held in… 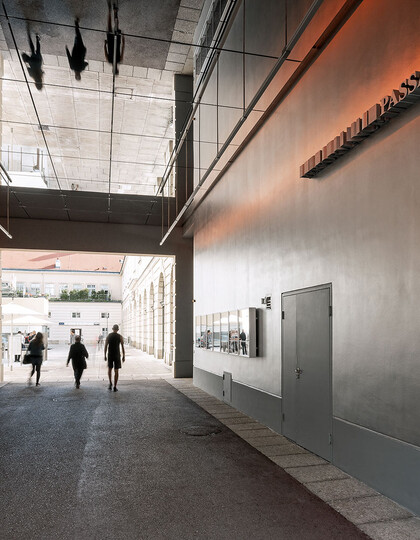 Designed after the artistic concept of Christoph Meier, the PERFORMANCE PASSAGE appears doubled by an entirely mirrored ceiling. Just like in front of the wall of a dance studio or the ceiling of a discotheque anyone can be a performer here, anyone can observe themselves. The installation concept, conceived and curated by Andrea Maurer, aims for a… 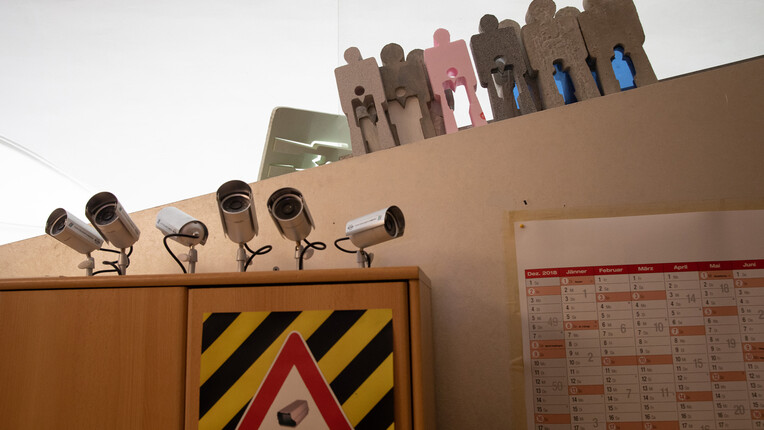 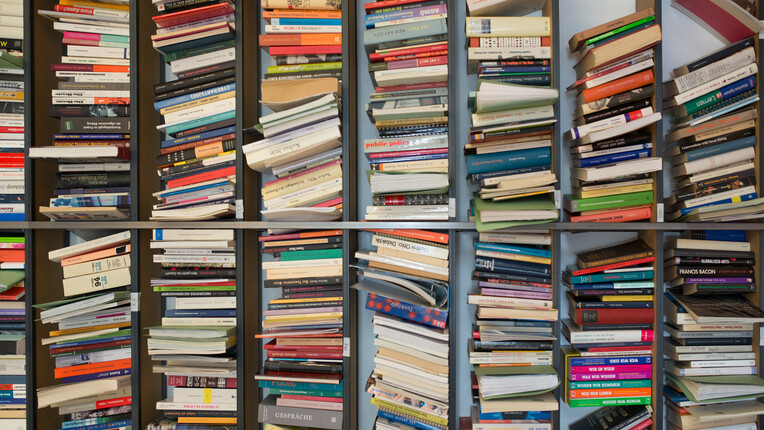 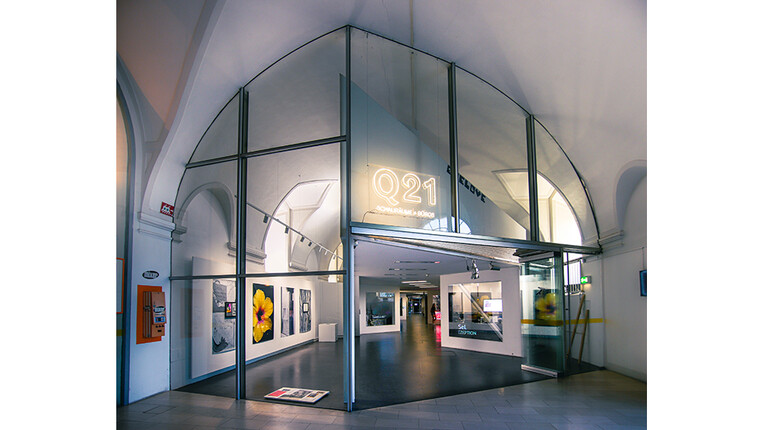 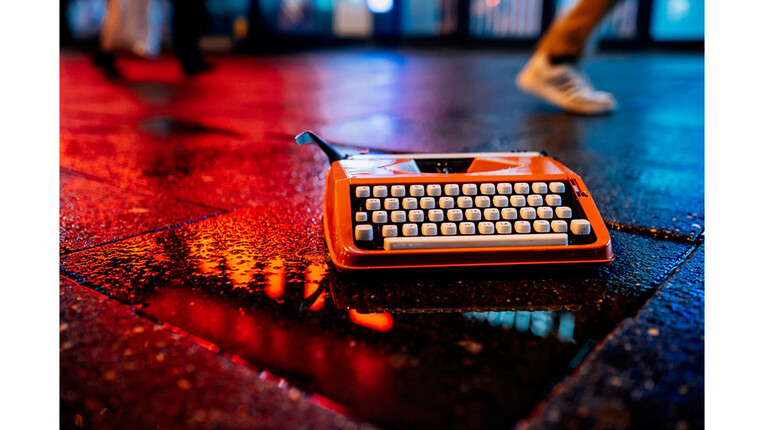