THE STASH beyond collectables: Exhibit 4 SOME CANDY / Race the Track

THE STASH beyond collectables: Exhibit 4 SOME CANDY / Race the Track 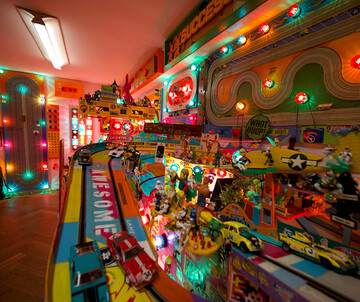 At the Open Studio Day, the artist not only provides an insight into his studio, you can also actively play with his installations. Martin Markeli is influenced by the time when the model car race track found its way into the affluent society of the 1970s, the car as a status symbol for young and old. Thus, the racetrack serves as a projection surface for the perception of a society focused on speed and competition. The artist takes up these aspects in his staging of objects. He presents them in a landscape with fast cars and various symbolic figures from the consumer world. The artistic confrontation takes place with the scene or the arena of car races. All senses of the viewers should be stimulated. The focus is on the interaction between the artwork and the audience, which is established through a playful approach.

THE STASH beyond collectables