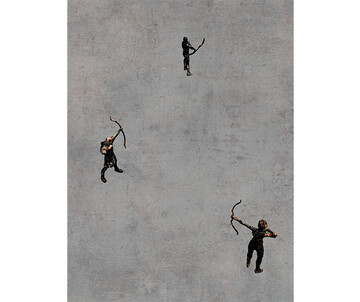 Lukas Posch’s installation Zugzwang shows a constellation of small, painted hand-made sculptures. They are caught in a triangle of condition-situation-action, within a formation in which the autonomy of each individual element can only be grasped within its installative setting.
In general, zugzwang means the need to perform an action, to achieve something, or to make a decision at a certain moment in time. In chess and other turn-based games, Zugzwang refers to a situation in which the player is unavoidably placed in a disadvantageous position due to the obligation to move. Even if it would be more advantageous not to act, the rules require a move, even if all possible moves would result in defeat.
Games are regulated activities in which rules are followed. Each player takes a position in a space or forum defined by the rules. This space or forum is also the result of conflict over the conditions or situation leading to the action. In this respect, the game, the players and the moves only exist under the structured constraints and possibilities of the rules of the respective game, which are situated in time and thus potentially changeable.
The question of negotiating the rules with a view to possible moves and future constellations connects two realities: that of the players and that of the game. The figure carrying out the moves manages without a traditional form of subjectivity and has no identity; rather it assumes one or more temporary identities in order to chart a determined progress: it is defined by the next steps it will take and not only by what it is at a particular moment in time.