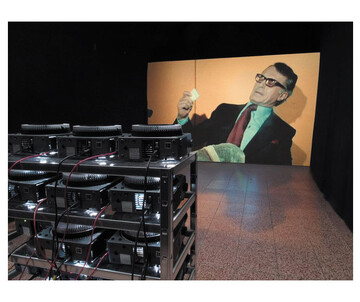 Analog 35mm motion picture film is cut up and the individual frames are mounted as slides. They’re then distributed among slide projectors that are all focused on the same screen.

Via electronic control of the projectors, these individual images are then reassembled into a chronological sequence.

The formula “one projector per frame” thus gives rise to something that at least rudimentarily suggests a motion picture. The film soundtrack emerges as a byproduct - the mechanical clattering of the projectors changing slides.

Gebhard Sengmüller is an artist working in the field of media technology. Since 1992, he has developed projects and installations focussing on the deep background of electronic media; retroactively changing the timeline of media history; and dissecting and recombining media technologies.