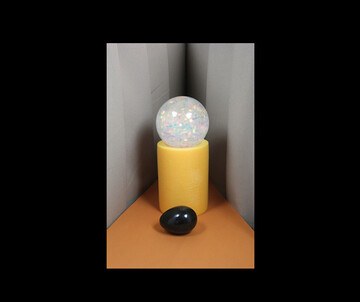 The third installation „Codex V: Space“ from the series „PERIODIKUM Issue I – The Codices“, explores the poetics of space.

Our present is located in an age of space and in an advancing consciousness of space. Because of the increasing density of space we long for a chance to pause a moment to experience the space around us and inside us as something accessible to our senses. This makes the spaces grasped by imagination no longer indifferent spaces that exist for themselves alone, only accountable in the form of geometric measurement, but directly perceptible poetic forms of extension. Identity with space develops when a human brings parts of its “persona” into balance with parts of space. The vibrations of the space and the individual correlate until the space becomes an “alter ego”. Sigmund Freud was the first to describe the causal connection of outer and inner world in an epistemological context. In the western world, this connection is understood as the one-sided impact of the outer world on the inner. Eastern philosophers, however, understand the outer world as an effect of the inner. Swami Vivekananda (1863–1902) defines human-space connections as “foundational harmonies” (Urharmonien); he calls the power that space emanates “the eternal,” which humanity does not create but receives or passively transmits. The human being and its image—architectural space—also includes the extrasensory and myth. In the myth, social relationships and our form of life are also reproduced within the idea of a transcendental existence, which is reflected and repeated in ritual. The poetics of any “contemplation of space” perhaps opens an internal window so that the space of our being can be felt—a space of enspirited material. The Worm in Art: A Bestiary of Contemporary Art Miriam Stoney: All along, the x-axis