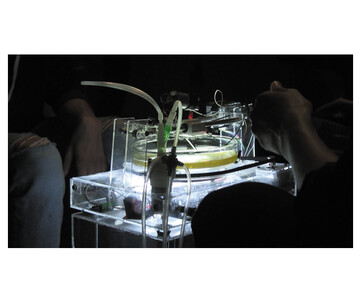 The loss of the diversity of languages and sounds is inexplicably accompanied by a decline in the diversity of oral bacteria, which also makes us susceptible to COVID-19. William S. Burroughs’ dictum Language is a virus from Outer space thus takes on uncanny significance for the installation/performance Entangled Speech which, however, presents the dangers less externally but negotiates them within the human being itself by allowing oral bacteria of the speaker to interact with their speech sounds.
Using voice spectrograms, biosensors and pheromones, visitors rehearse the sounds that create an ecological environment for their microbes through salivary acids and respiratory oxygen. Between semantic, phonetic and ecological meaning, a hybrid language and a strange protection against viruses is created.

Klaus Spiess and Lucie Strecker develop bioartistic performances. Their work has been shown in the USA (UCLA, UCI, Buffalo, Omaha), Germany (HKW, Berlin) and has been honored with a Prix Ars Electronica and published several times in ‘Performance Research.’