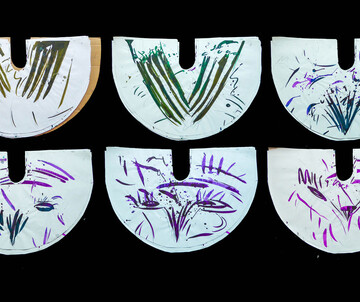 When Peter Putz first saw animated films by Norman McLaren more than 40 years ago, he got immediately addicted: Inspired by the directly on filmstock scratched, drawn and painted works he started himself during a study year in Poznan / Poland in 1977, with the simplest material and equipment to make „animated films“. His first film „OBUWIE“ (Shoes) won several awards at international film festivals, many other films and videos followed. The presentation in the ASIFAKEIL shows early film works and original drawings and objects from the time of creation. In addition to OBUWIE (1977, 2 min.) And TV Montezuma (1987, 3 min.) also „Mont Real“ (1988/89, 20 min.), created during a residency at Concordia University in Montreal/CA. Since 1980 Peter Putz has been working on the project The Eternal Archives – an Encyclopaedia of Reality.

Numerous exhibitions and presentations, among others at Wien Museum (2012), Kunsthalle Wien, MQ (2014), Maison Heinrich Heine, Paris (2015), Concordia University, Montreal (2015). The video „The Eternal Archives · Putting in Order and Being Put in Order“ premiered 2019 in the Blickle-Kino in BELVEDERE 21.