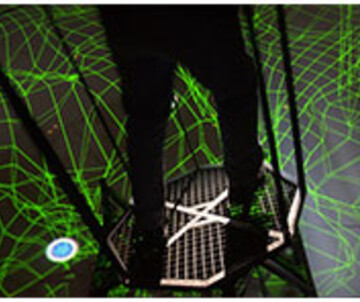 In the last years performance has taken a great influence from digital forms of story telling such as video games. Ancient dramaturgical techniques have been merged with new ways of interactivity, creating meaningful real world experiences. We see projects ranging from the immersive explorative environments of “Punchdrunk” and “Signa”, to alternate reality games by The Mission Business and interactive telephone performances by Blast Theory and Coney. From multimedia art to urban games, escape rooms and theatrical performances, playful artistic movements are slowly entering mainstream culture.
In this panel discussion Andreas Mayrhofer (Time’s Up), Georg Hobmeier (Causa Creations / Gold Extra) and Philipp Ehmann (Play:Vienna) discuss their working methods and the issues of creating real world playful environments.

Time’s Up collaboratively investigate ways in which people interact with and explore their physical surroundings as a complex context, constructing interactive situations not unlike the normal physical world, inviting a playful experience-driven exploration of the space. Their latest project Turnton Docklands at Lentos & Ars Electronica Festival lets audiences explore the fictional docks of Turnton as an immersive set.

Georg Hobmeier has done all sorts of things over the last 20 years: carrying coffins, working as a bouncer, experimenting on the intersections of technology and the performing arts, and most recently making computer games with Causa Creations and gold extra. In 2018 he will return to the (Volks)theater with an augmented reality game called “Vienna – All Tomorrows”.

Philipp J. Ehmann is a theatre director and game designer working with different media (from theatre to urban games and multimedia art) to encourage playful discourse on complex topics through interaction and play. He is co-founder of Play:Vienna and works internationally in many different contexts.