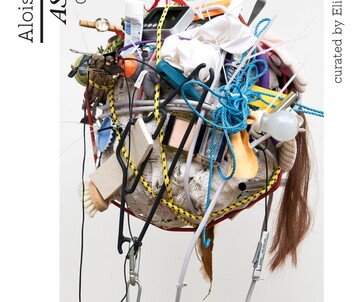 In the American TV series «Ascension,» set in the year 1963, the government sends several hundred people into space on a so-called generation ship.
After approximately 100 years it is to reach a new planet, which the offspring of the original crew is to populate. But soon, the viewer finds out that the whole thing is just a crazy experiment. The space ship never left the Earth and the crew is observed from the outside while – isolated from the rest of humanity – they build a new society.
Similarly, in the installation of the same name by Alois Mosbacher, floating objects never leave the artificial garden in which they are located.
The branches, leaves and fruit drawn with charcoal and chalk transform, ascend and freeze in three-dimensional shapes.
Mosbacher is practising science fiction, but he is not creating a dystopian future. Science fiction allows us to dream: of a better future with the vision of improving the world.