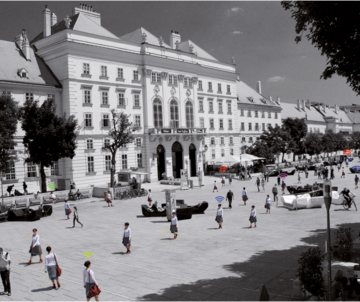 The setting is the courtyard of the MuseumsQuartier in Vienna. Two actors are walking and observing: people, movements, images, the atmosphere. They are describing what they see, they exaggerate, they use their imaginations, they become more serious, they fall silent. They are describing their impressions into wireless microphones. The signals are fed into a mixer, where the composer Laura Mello underscores this "living audio guide" with pre-produced sounds and sounds that she processes live. The mutual interplay of three protagonists is mixed in realtime and broadcast on the radio (Orange 94.0) within the radio series from the viennese Radia collective (radia.fm). Passers-by on location or listeners elsewhere can hear the action on normal USW radios, or with a Radio App on their smartphones. If you happen to also find yourself in the courtyard of the MuseumsQuartier it is very likely that you will be included in the observations, and so could have an impact on the process of making Living Radio.

Laura Mello is subsequently drawing from the rich store of audio material from the live action to complete a new sound work for the TONSPUR_passage as an Artist-in-Residence.