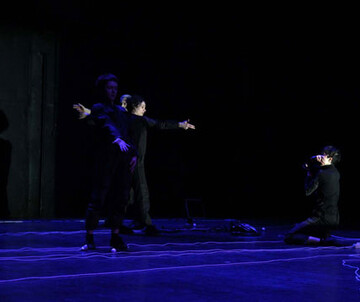 BADco. (HR)
Black and Forth

Black and Forth is about obsession: the obsession of watching, the obsession of forging a relationship between the observer and the observed, the obsessive search for the materiality of the invisible, the unexhibited and the unsubstantiated. Every scene on stage is a note to its own making, a note on the possibility of creating an image, a physiognomy of a world held as a promise in the image, the responsibility for the optical unconscious, a note to all that differentiates a technologically produced image from magic. The repertoire of this theater production has been determined by a translation of cinematic procedure and film production into theater. In the performance, which is part of the long term project Responsibility for Things Seen, the Zagreb based artists\' collective does not see film or theater as distinct media, but as circuits of desire for the very apparatus of representation: What is the position of the viewer in watching? Are we related to the images that we see? Who are the off-screen, invisible people? When does the film extra become the performer, or the performer an extra in her own performance?