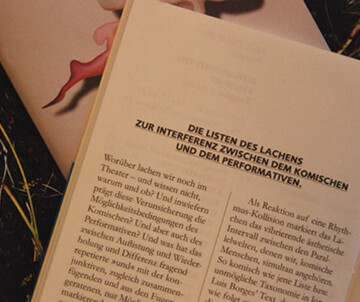 The success story of radio and television is not always connected with a success story from the audience\'s perspective. Its scepticism becomes audible especially when it stays quiet where it is supposed to laugh. The answer was \"Canned Laughter\", a tape recording of laughter which could be inserted without depending on the audience whenever laughter and a good-humoured audience were to be suggested. In the wake of the success story of Canned Laughter the audience began to listen to itself laughing, and as a rule smile about it. The lecture tries to retrace the consequences of this presence of an inexisting audience.
Andreas Spiegl also refers to the choreographic work of Paul Wenninger.

Andreas Spiegl is an art theoretician and lives and works in Vienna.