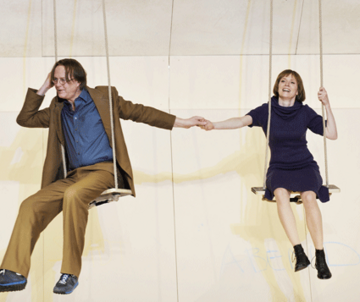 Date: May 19 to 21, 19:30;
Discussion with the audience following the performance on May 20
Venue: Halle E
in german language

A big wheel, a story-mill paddles or scoops a never-ending rotating cycle of people and stories on stage. The characters have to balance, lie down, sway on the moving surface and, as in their lives, are always on the point of slipping and falling. Twelve stories in 37 episodes, twelve failed life plans. The dreams and illusions of these people are greater than their space to live and breathe in. This makes them go and stay crazy.

Insurance broker Finn refuses to get up again. His sister Linda has lost her job at the spa and tells an imaginary husband and child a story about a wolf she saw. Salesclerk Monika was promised a promotion by her boss; she enrols for additional training courses but is sacked anyway. Ira\'s husband has gone missing - he only went out for a walk.

Dea Loher calls them all \"thieves\". People who feel as if \"they were surreptitiously sneaking through their own lives, carefully and shyly as if it were not theirs, as if they had no right to be in it\". They strive desperately to be individuals while life levels them down to uniformity. With difficulty, they move through an increasingly fragile world. Relationships are fractured, workplaces are insecure, superiors are cheats and liars, the future is nothing but vague potentiality. Nothing is safe anymore.

The latest production by Andreas Kriegenburg shown at Wiener Festwochen was Der Prozess based on Kafka\'s The Trial in 2009.