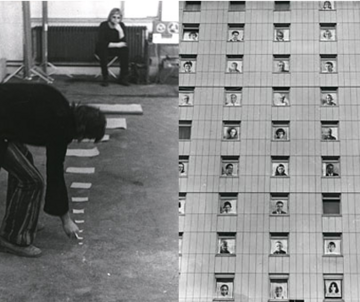 In 1969 Eva Madelung (patron), Peter Nemetschek (artist photographer) and Alfred Gulden (theatre studies) established Aktionsraum 1 as an avant-garde collective in Munich. They thus created a space for young artists in which conventional works and presentational forms from the art-world were to be avoided in favour of providing an effective public platform for the new performative and institutionally and socially critical thrust of the arts.

Over the next year, 50 projects concerned with actionism, performance, and Arte Povera took place in a rented and empty factory on Waltherstrasse. Artists such as Klaus Rinke, HA Schult, Jochen Gerz, Christian Attersee, Günter Brus, Hermann Nitsch, Giuseppe Penone, Braco Dimitrijevic, Ben Vautier, Günter Saree, Luciano Fabro, Stanley Brouwn, Gruppe OHO and others tried out alternative and innovative art forms in this off-space precursor. The list of artists also reveals the international standing and avant-garde orientation of the enterprise. The opening on the 18th and 19th October 1969 featured Klaus Rinke, Lindow-Borlat and Tony Morgan. Amongst the most legendary of the action were the Zerreißprobe [Endurance Test] by Günter Brus and Hermann Nitsch\'s 7. Abreaktionsspiel [7th Reaction Game].

The Aktionsraum also functioned as a field of experimentation for participative and communicative projects that included the public and took into account art education by means of art in the form of lectures and discussions. Project failures were as much part of the enterprise as the possibility of new ways of experiencing including the ignorance or enmity of a section of the public and its authorities. What remains of the mainly processual and actionistic works are films and photographs as well as documentary and recorded texts and notes which to some extent reflect the reaction of the public and media. Alfred Gulden saved the works and documents and handed them over to collector Egidio Marzona. It is his archive which forms the basis of the MUMOK exhibition that traces the complexity-as regards both content and organisation-of this chapter of more recent, and in many respects transdisciplinary, art history. Films, posters, sketches, letter, and documentary photographs will be on display.