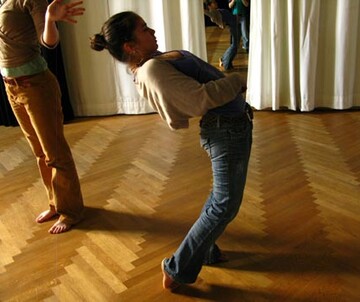 allowing the body...
Moravia Naranjo focuses her teaching in sensing recognizing and expanding inner spaces of the body, to explore mutual connections between these inner spaces and the environment. Breathing (as motor and consequence of the movement), voice (as continues vibrating energy), releasing and postural/alignment exercises are some of the tools that Moravia Naranjo will propose to travel into the body, in the room and through imaginary spaces. For Moravia Naranjo, allowing the body... means experiencing the malleability, permeability, flexibility, fragility and strength of the body. To help allowing the body... Moravia Naranjo provides Spiky Balls (20cm) and Balance Balls (26cm) for each of the participants, as well as her own approach of using these props. These balls are how she says \"the assistances\".

The Venezuelan Choreographer Moravia Naranjo and dancer developed her own choreography and teaching with the Pisorrojo Dance Company of the Central University of Venezuela (1991-2001); she graduated in Mass media -Social Communication at the same university in 2007. She studied dance at the Pisorrojo Dance School (1991-1993), Danzahoy School (1993) and Contemporary Dance School of Caracas (1991-1995). She was a Dance Web Scholarship recipient at ImPulsTanz - Vienna (2001 & 2002). She is also Pilates trainer since 2007. Since Moravia Naranjo lives in Vienna (2001), she works in her own creations as well as she collaborates with the Austrian Company DANS.KIAS/ Saskia Hölbling. She participated in 12-seny-6 by Tanz Company Gervasi at ImPulsTanz (2003). With Canadian Choreographer Benoît Lachambre she collaborated in the creation Lugares Comunes (2006) and works again with him for Body Scan (Benoît Lachambre & Su-Feh Lee 2008). Moravia Naranjo\'s own creations in Europe include entre otras cosas -a duet with Ailed Izurieta- (2002), the solos ánimo (2003), atraída (2004), alien.able (2006) and the piece skin, voice & memories of someone else... (2008).