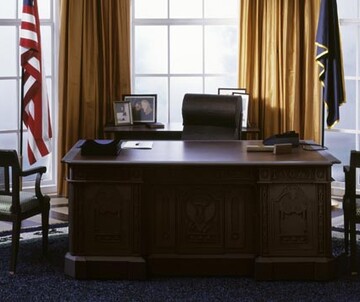 The MUMOK Factory is presenting Thomas Demand (born 1964 in Munich) with the two work series Presidency (2008) and Embassy (2007). Demand, who sees himself as an \'illusionist\' or \'reproducer\' of the media, is one of the most successful artists on the contemporary scene. His large-format photographs were acclaimed most recently in the Museum of Modern Art in New York and at the Biennale in Venice. At present the Neue Nationalgalerie Berlin www.demandinberlin.de  is preparing his most extensive solo presentation to date in Germany.

Thomas Demand\'s works show deserted architectural constructs of explosive socio-political events - for example \'crime scenes\', which are anchored in the collective consciousness. Although it seems the photographs are of real, existing places, they prove at second glance to be clever reconstructions of reality. Starting out with photographic sources from the world of the media, the artist constructs life-size, true-to-detail models, which he photographs and then destroys again. His works are based originally on a sculptural concept and founded upon a work process carried to extremes in its personal and time-consuming intensity.

In Presidency Thomas Demand focuses microscopically on one of the most prominent theatres of power - the US president\'s office in the White House. He built a tiny model to scale of the Oval Office out of paper, cardboard and confetti, only to destroy it after photographing it. The series originated as a work commissioned for a cover story of the \'New York Times Magazine\' of 9 November 2008, five days after the presidential election in the United States. The Embassy series is likewise political in content and deals with an incident taking place in January 2001 in the Nigerian Embassy in Rome: stationery and stamps disappeared after a break-in which were used later to fabricate proofs of a supposed operation to smuggle uranium into Iraq. The faked documents were eventually used by the Bush administration as a legitimation for the war in Iraq. Both works are linked to each other, not only through their motif as places of state representation. The extreme popularity of the Oval Office is in diametrical contrast to the unknown site of the Nigerian Embassy, yet both places are \"theatres\" of historical action in Demand\'s ideation.