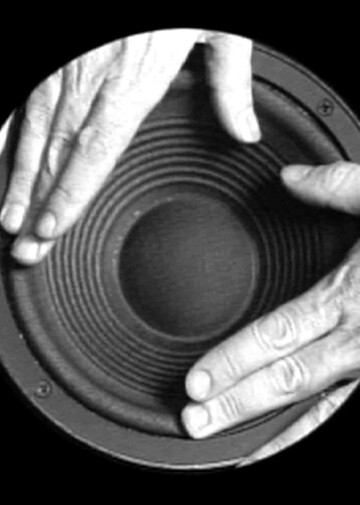 “TONSPUR_expanded ∞ The Loudspeaker” is the first exhibition explicitly dedicated to the loudspeaker as a crucial instrument for artists working with sound. Pieces by twenty-seven international artists offer an insight into the wide range of creative approaches to sound in art. Curated by Georg Weckwerth..

Sound sculptures, sound installations, videos, mixed-media installations, and two-dimensional works focus on the loudspeaker in art as the topic of the exhibition. Classic audiovisual works are juxtaposed with contemporary sound art and visual art. The show is presented in the exhibition space and in various public areas in the MQ.

An extensive accompanying program will complement “TONSPUR_expanded ∞ The Loudspeaker” with performances, presentations, lectures, curator tours, workshops for kids and young people, and an open call for the creative recycling of old loudspeakers. Curator Georg Weckwerth and Peter Szely received the 2010 Prix Ars Electronica award for “TONSPUR für einen öffentlichen raum,” an international exhibition project organized in cooperation with the Federal Ministry for European and International Affairs and the German and Canadian embassies in Vienna.

The central piece in the exhibition is the sculpture “AUDIO GUILLOTINE” by guest artist Benoît Maubrey, a site-specific work that interactively engages the audience. Once an hour, a guillotine will destroy loudspeakers broadcasting spoken recordings contributed by exhibition visitors. In order to keep this installation going, Viennese residents are also encouraged to participate in the open call “Loudspeakers for the Arts!”. About 1,000 old, disused, or defective loudspeakers are needed from now to the end of the exhibition. They can be delivered to Combinat in quartier21 at the MuseumsQuartier Wien effective immediately.

Renowned media artist Gary Hill will show his videos “Soundings” and “Mediations (Towards a Remake of Soundings)” as well as “Cut Pipe,” a video sculpture that poetically explores the sensory experience of language and image. Janet Cardiff & George Bures Miller are presenting three new pieces with “dreamstories” from a series based on antique telephones. Visual artist and architect Bernhard Leitner takes a look at the head as a sound space in his installation “KOPFRÄUME.” Rolf Julius is represented with a mixed-media installation and an eight-channel installation in TONSPUR_passage.

Other pieces include Werner Reiterer’s recent sculpture “When Feminism Becomes Form” and Sabine Groschup’s “VogelZeitRaum - Space(s) for Birds Time.” The installation in freiraum quartier21 INTERNATIONAL and on the MQ Forecourt announces the time of day with various bird songs. Dawn Scarfe uses loudspeakers to examine the characteristic sound of wine glasses while Friedrich Jürgenson employs them to transmit the frequency 1485.0 kHZ “to communicate with the dead.” Jean-Pierre Gauthier is showing a kinetic wall installation called “Uncertainty Markers” and Gordon Monahan is presenting “Music from Nowhere,” a series of loudspeaker sculptures, and the performance video “Speaker-Swinging.” The installation “BETON – A Suicidal CIRCUS ON Concrete” by Robert Schwarz is based on a verbal score by John Cage and a story by Thomas Bernhard. Douglas Henderson, in turn, pays tribute to rock music in his piece called “stop.”

An exhibition in cooperation with the Austrian Federal Ministry for European and International Affairs, as well as the German and Canadian Embassies in Vienna.