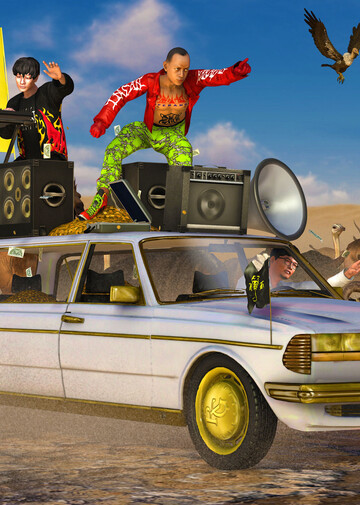 After sudden isolation struck like sunrise to an over-dilated eye, a new and uncertain world seeped into focus. Dance and uncertainty are by no means strangers: congregation and movement when in response to personal and collective crises, becoming a dance of urgency. Such a dance aims to empower the individual and the group—it builds communities of survival and coping; it can perform as a powerful agent of urban renewal and political resistance*. From cultural spaces reinvigorating decaying neighborhoods to international protests against gentrification and fascism—dance is the weather of the cultural and political climate and a potent form of defiance. Though, when a medium is so dependent on presence and closeness—how does it manifest over enforced distances? What did it mean to you once dance was not allowed?

During the pandemic governments were granted new powers of surveillance—some taking oppressive measures to crack down on protest rights under the guise of national health measures. This most greatly impacted vulnerable communities, whose right to assembly was threatened. On top of this many gathering spaces were left without financial support—deemed “non-essential”, “for entertainment”, or “culturally insignificant”. In response, communities rallied to self-organize online and eventually—in public space. This new state solicited new questions: can protest, outcry and resistance against oppressive governments keep momentum under these circumstances? Further, can dance offer us the tools to destabilize the ones created to coerce and surveil us?

As tragic as it was dynamic, this has been a period of significant loss—of life, intimacy, expression and language itself. These new voids haunt: fragmented bonds, loss of freedom, social unrest and death silhouetting themselves against celebrations of survival. Calling some to violate the rules—illegal raves performing as a kind of “danse macabre” in acceptance of risk and death, or demonstrating escapism as emotional self-care. Almost entirely produced during the pandemic, No Dancing Allowed maps and bears these contradictions—integrating recent history with these last three years, it asserts dance and dance spaces as entities whose transformational nature grant us the power to thrive in times of great adversity—and bravely reemerge.

* Encountering club culture and dancing as a form of protest during the NATO bombing of Doringer’s native Serbia, he discovered how socio-political instability and collective coping mechanisms of movement are linked. Sparking a research investigation and later a PhD at the University of Applied Arts Vienna—providing dance culture knowledge since 2014. It is a continuation of the online events that happened during lockdowns, in cooperation with the department of ‘Social Design—Arts as Urban Innovation’ of the University of Applied Arts Vienna.