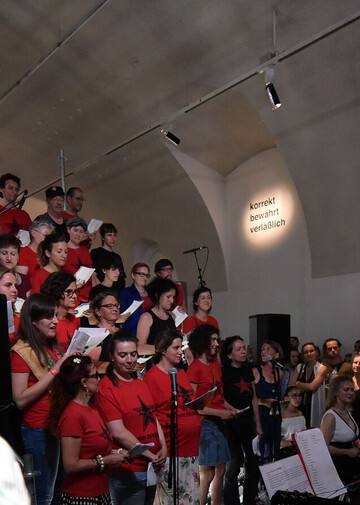 In 2016, Austria celebrates the 50th anniversary of the contract of 4 April 1966 between the Republic of Austria and the Socialist Federal Republic of Yugoslavia establishing a basis for the legal and voluntary migration of labor, and so creating the “Gastarbeiter” (Lit. guestworker) phenomenon. Article 9 of this historically significant contract specifically endorsed the promotion of this mobile workforce's own cultural and social life, and led to the founding of over 100 workers social clubs. Following the international success of his project “FACELESS,” artist and curator Bogomir Doringer returns to the MuseumsQuartier Wien with a new exhibition. “AJNHAJTCLUB” explores the history of this community as reflected in these clubs, which were not only regarded as spaces for maintaining and bolstering cultural identity and for providing a sense of participation, but also provided a vent for nostalgia towards the old homeland. The opening reception is on Tuesday 5 July, from 7pm, at which the director of the MQ, Christian Strasser, and Minister of Foreign Affairs Sebastian Kurz will be present. There is a guided tour for the press at 10am. Admission is free.

In celebration of this community's fiftieth jubilee in Austria and as a gesture of gratitude to those men and women from the SFR Yugoslavia, now Slovenia, Croatia, Serbia, Montenegro, Macedonia, Kosovo and Bosnia and Herzegovina the “AJNHAJTCLUB” (pronounced “EINHEIT CLUB” — Oneness or Unity Club; “JEDINSTVO KLUB”) opens at frei_raum Q21 exhibition space on the territory of the MuseumsQuartier in Vienna. This “club” aims to unite these migrants' past and present narratives using contemporary artistic practice and research, providing a look back to inform the future. Although more familiar from black and white imagery, the guestworker phenomenon is still alive. The exhibition shows this phenomenon in full color, complete with animated 3D avatars, modern folklore, interactive performances and contemporary interventions. 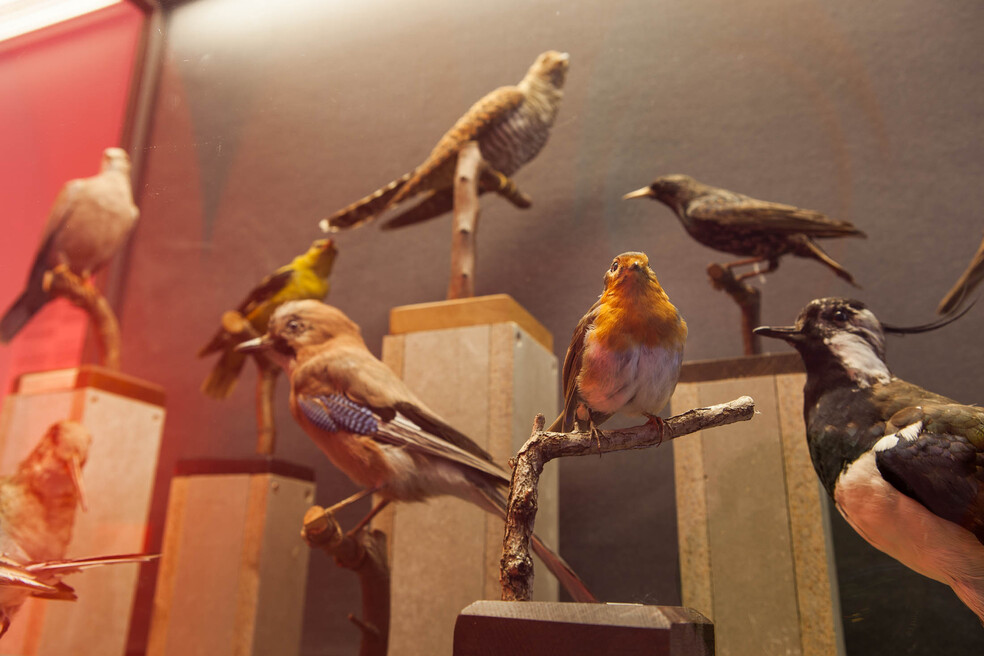 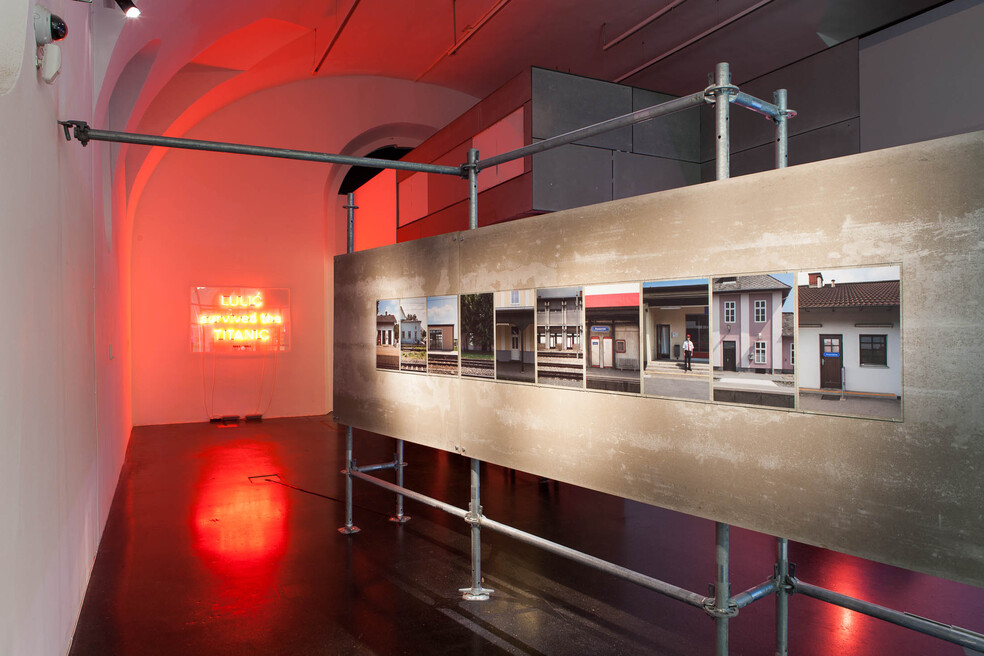 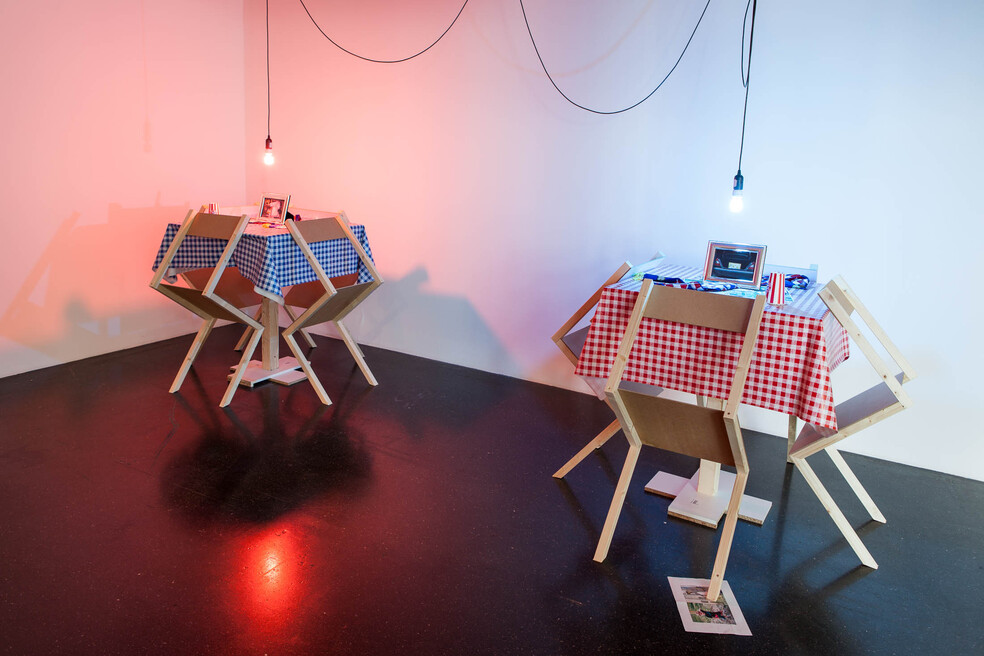 Josip Novosel: U CAN SIT WITH US, Photo: Max Kropitz 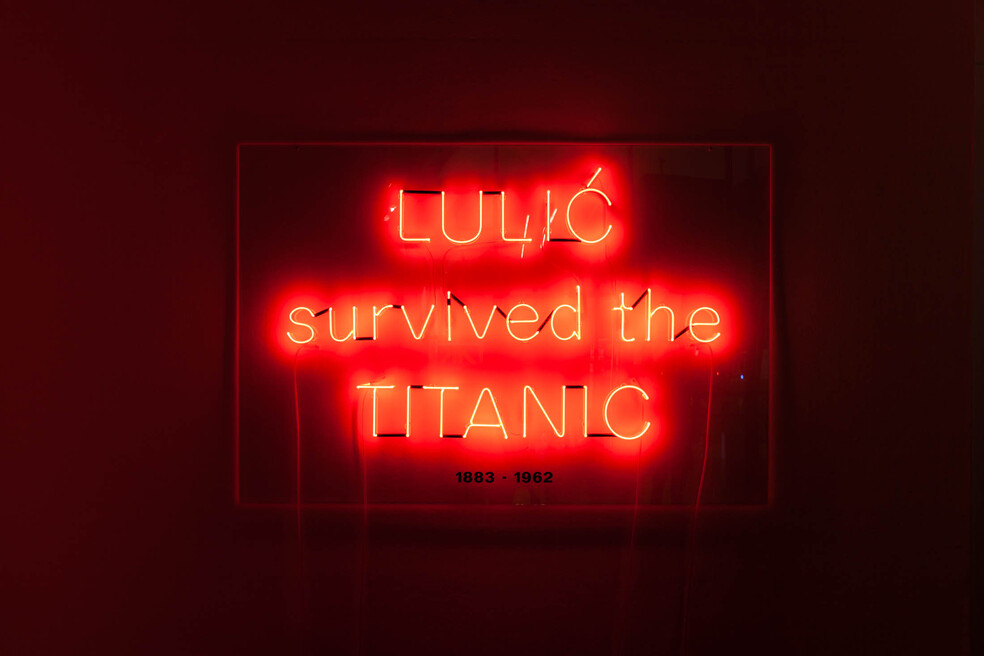 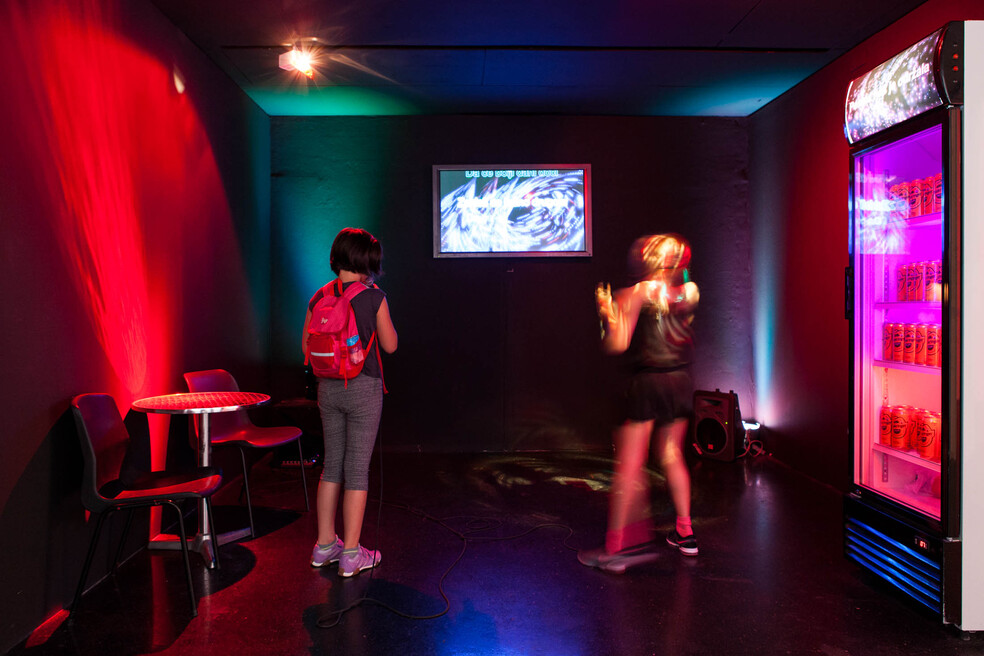 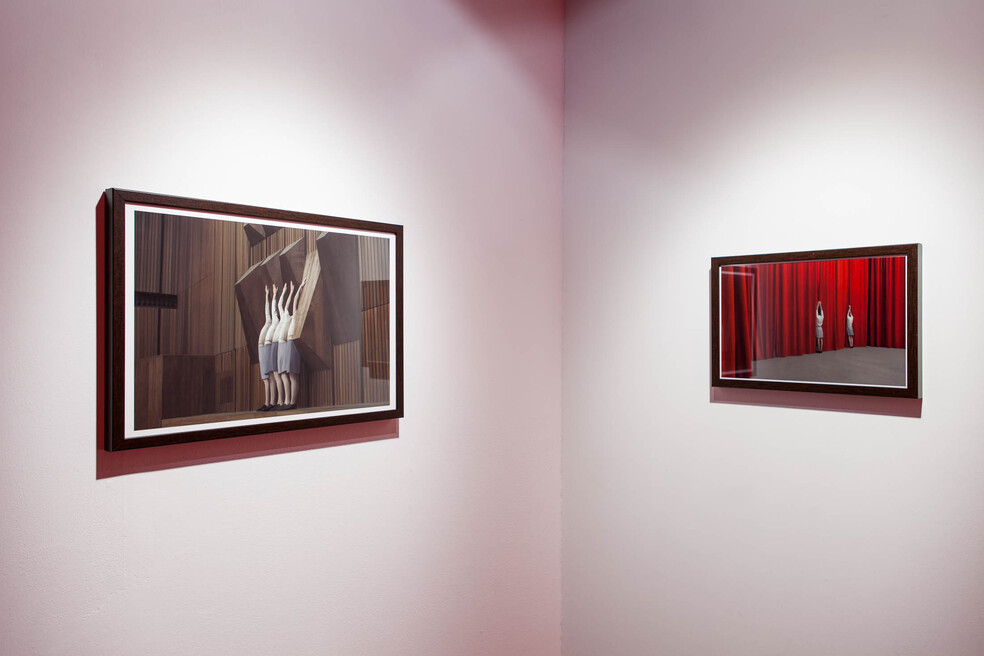 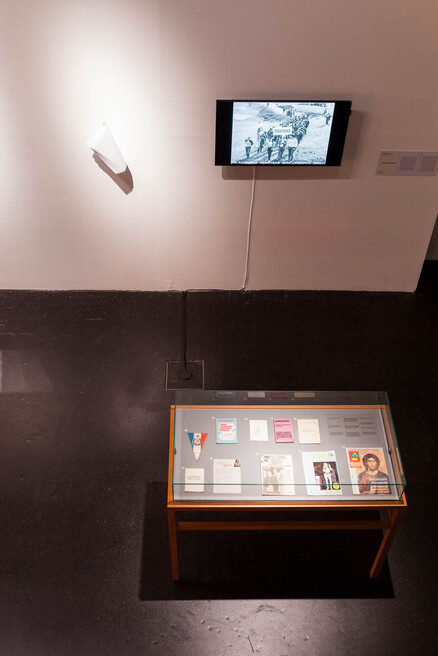 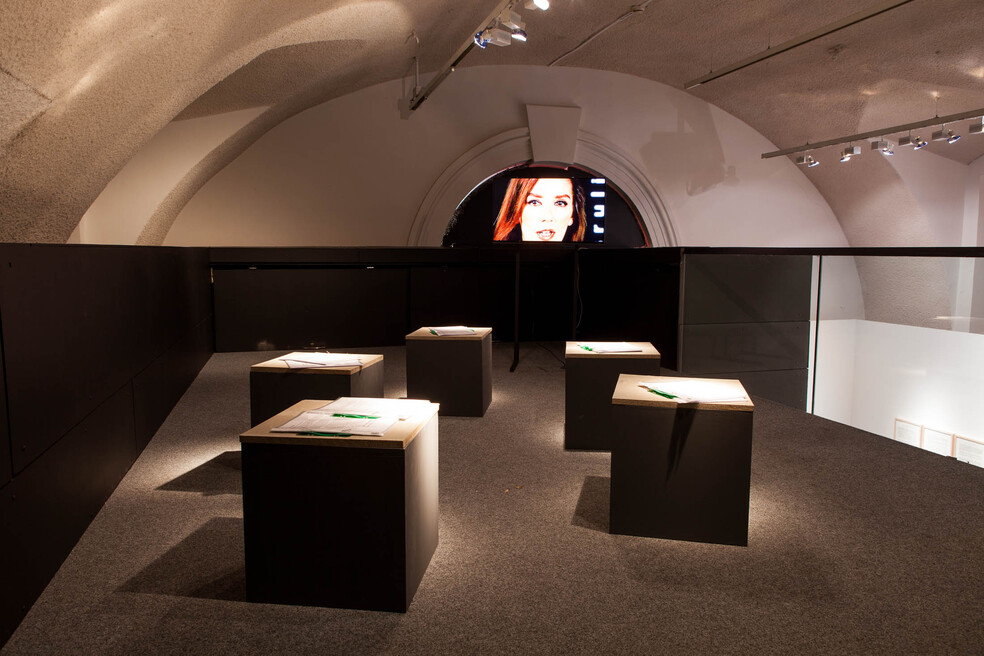 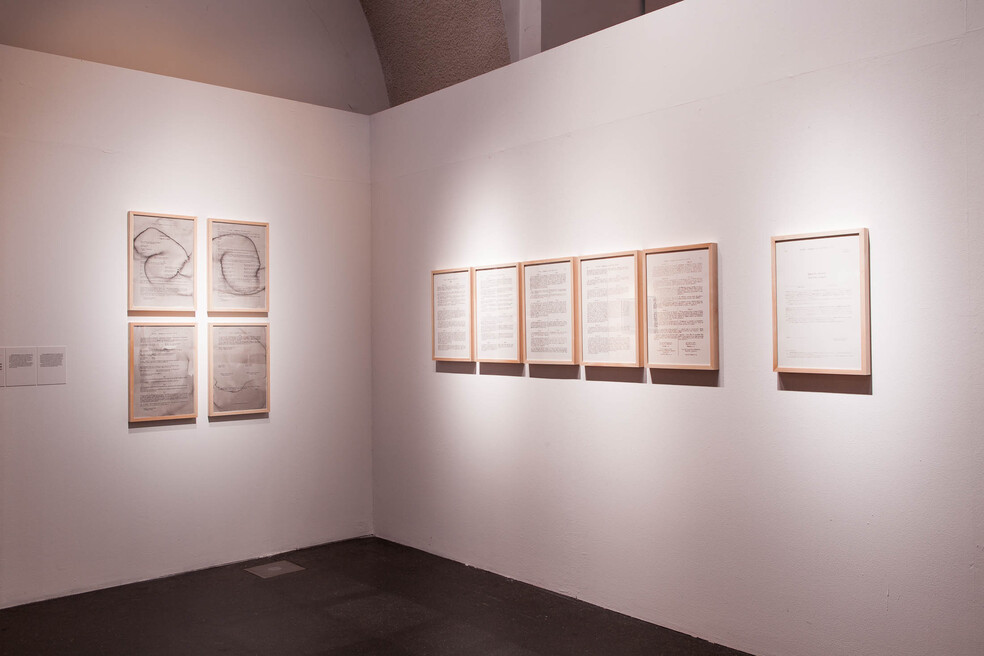 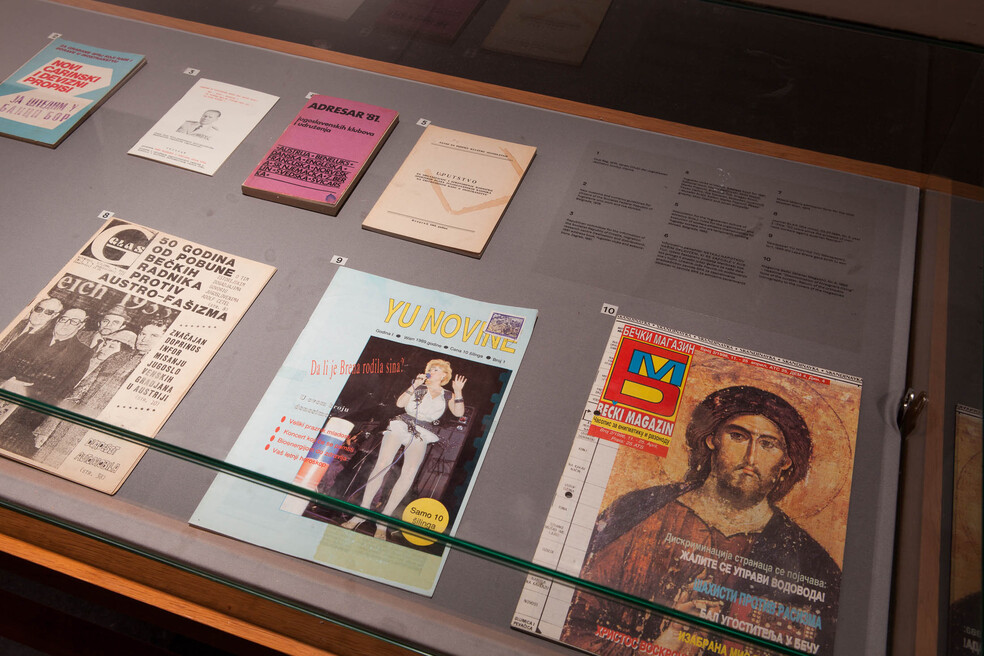 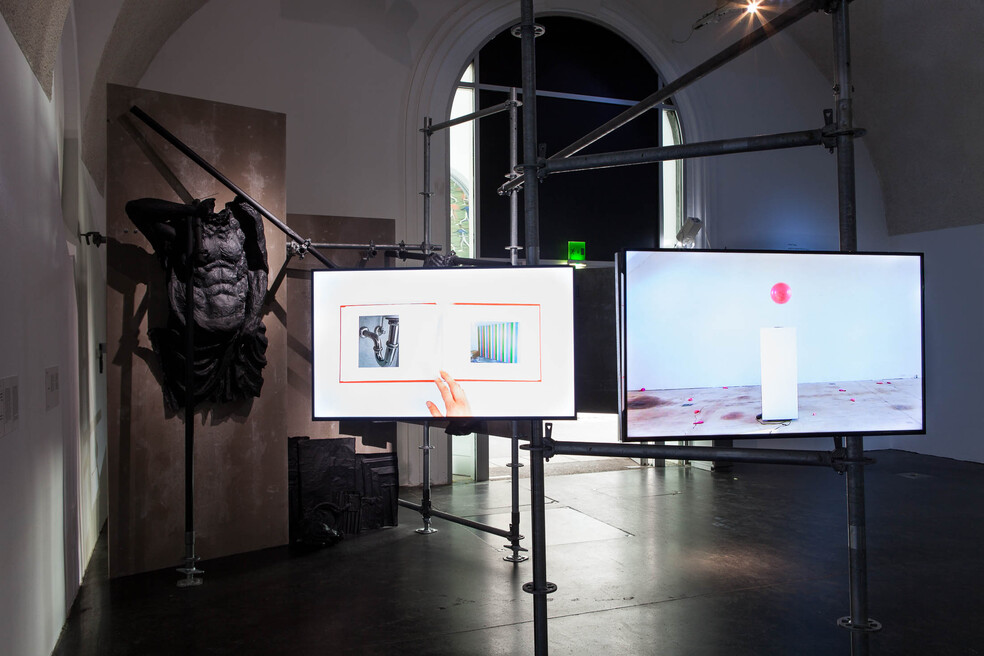 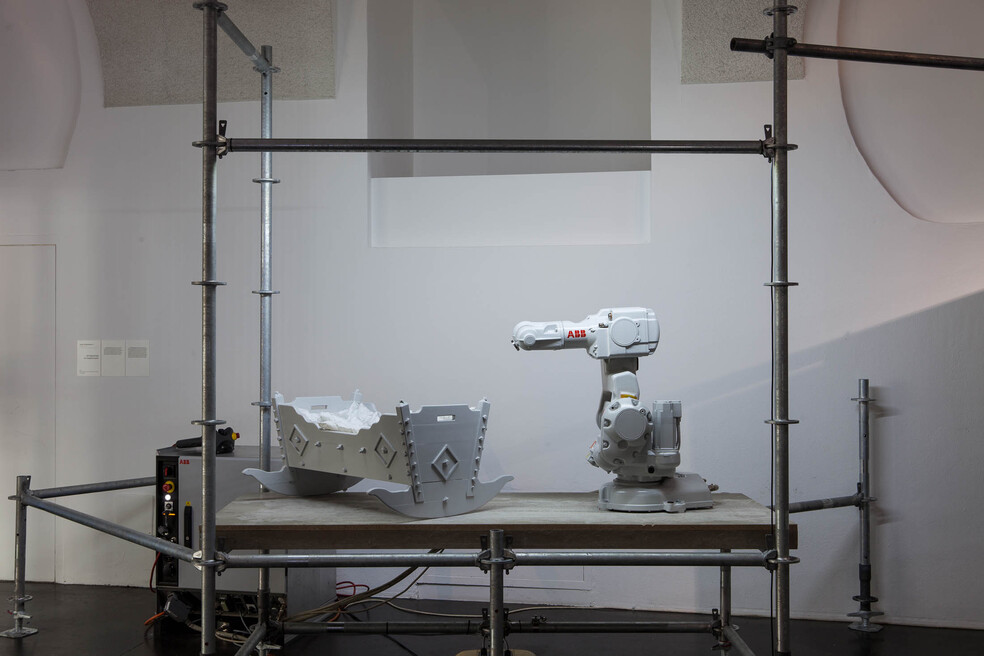 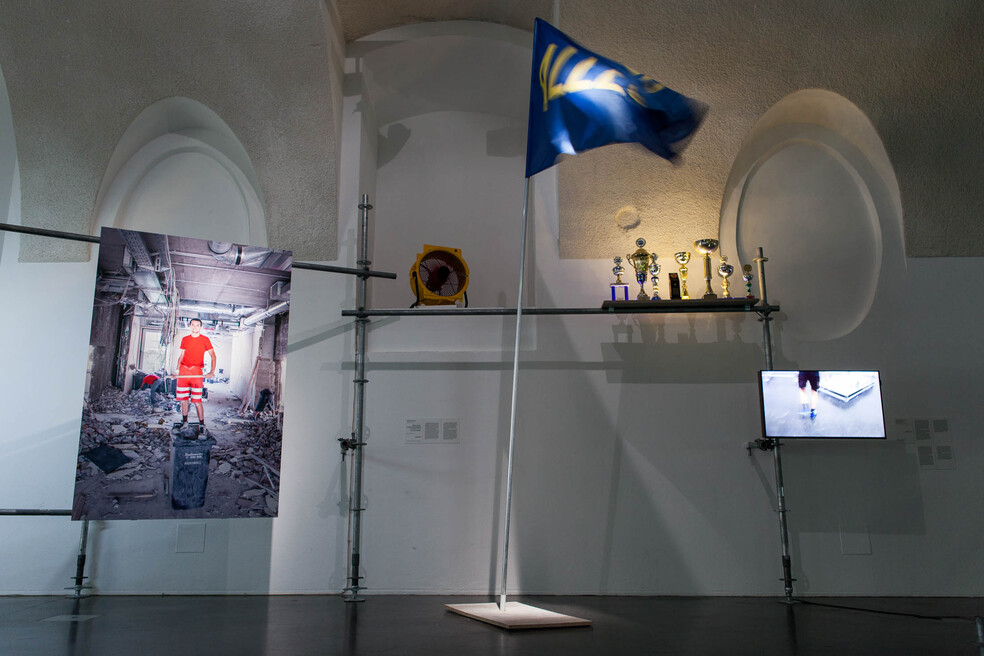 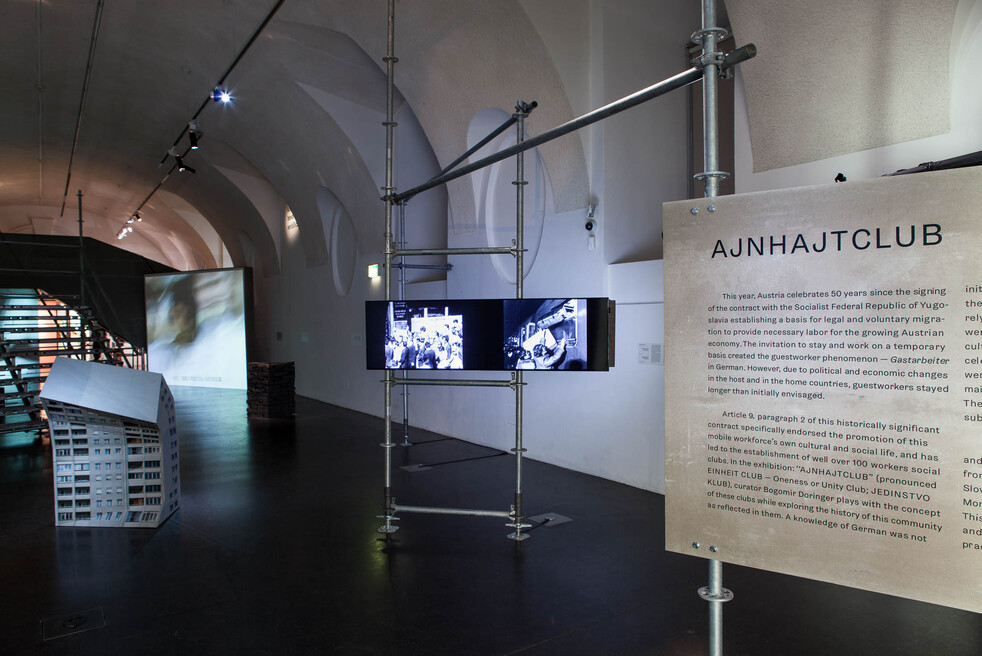 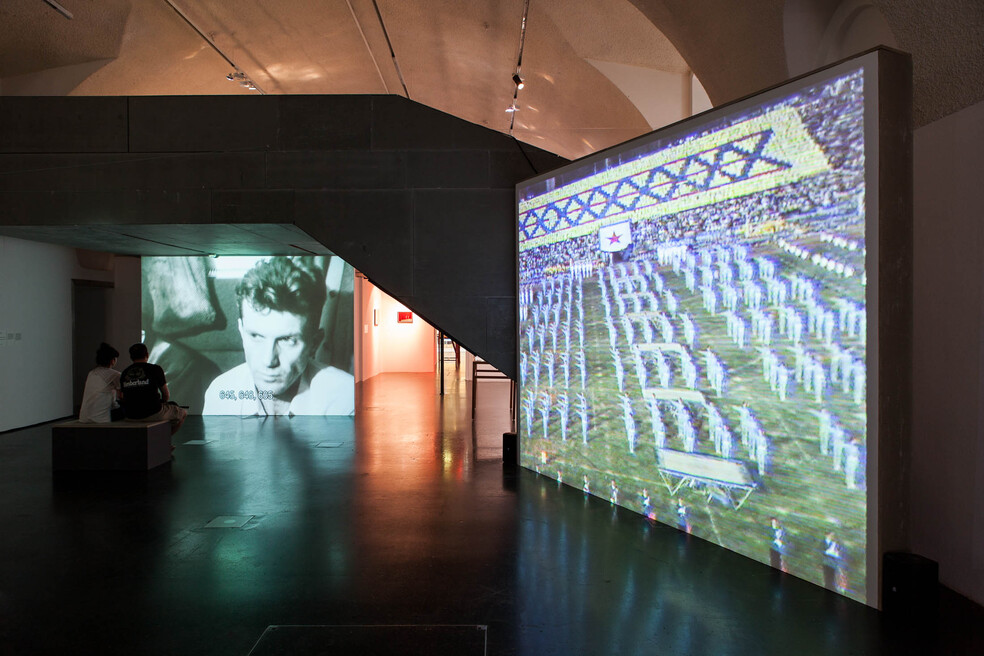 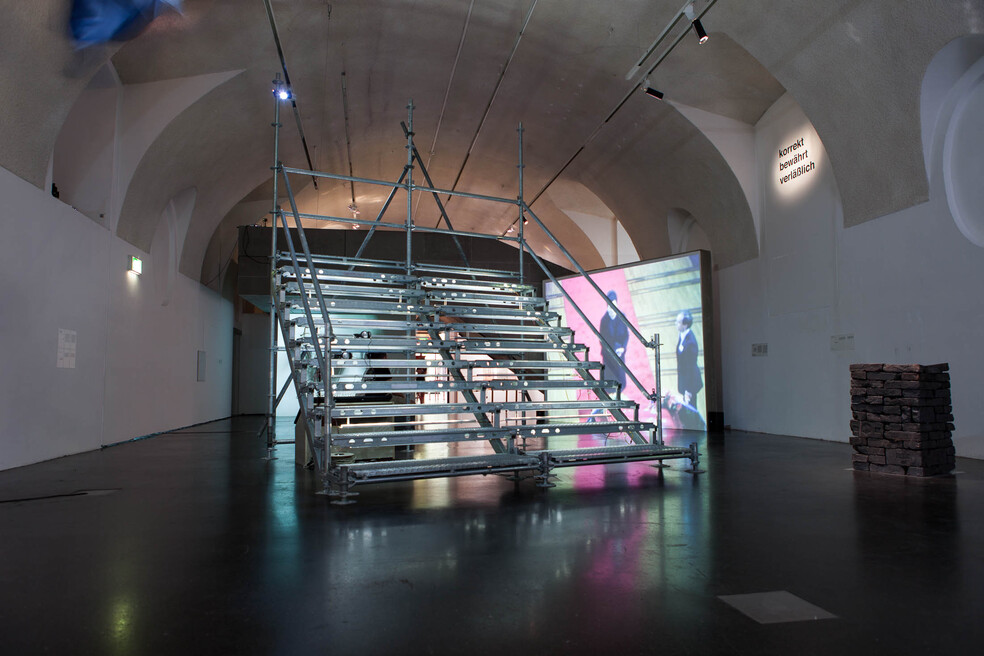 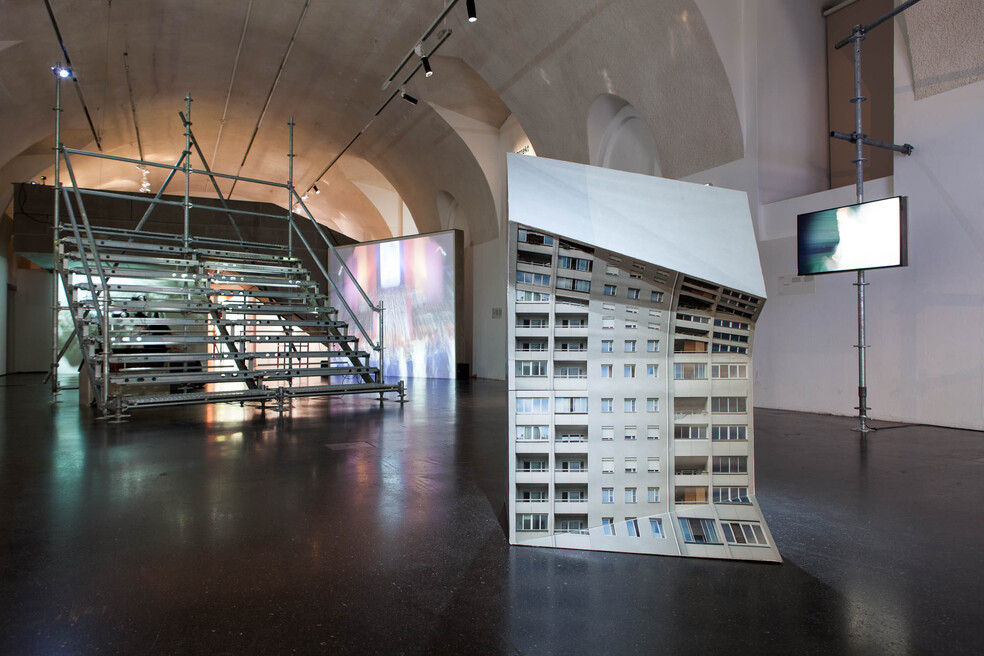 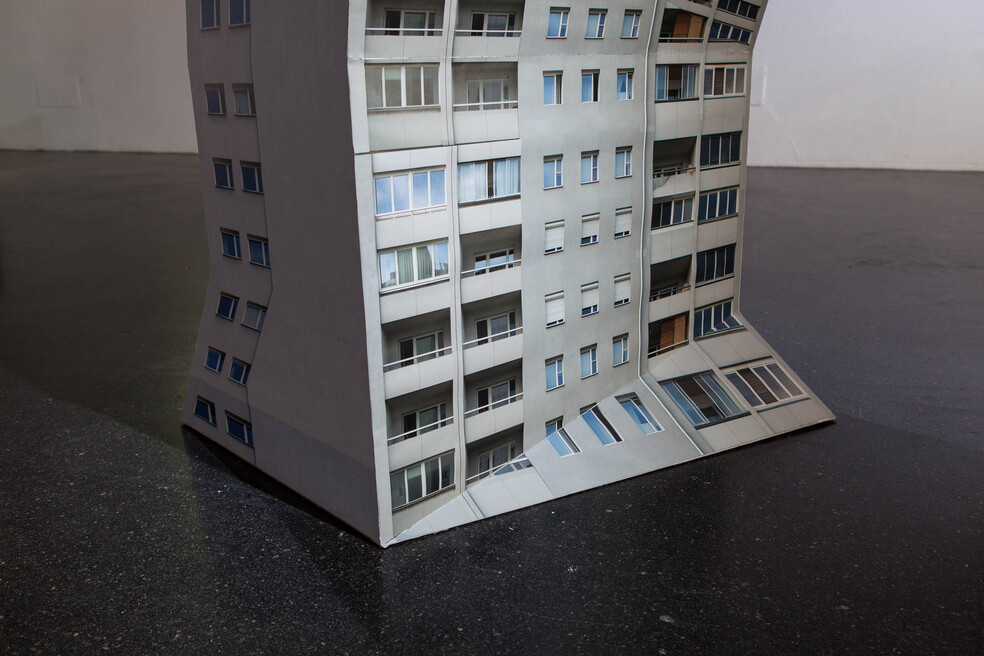 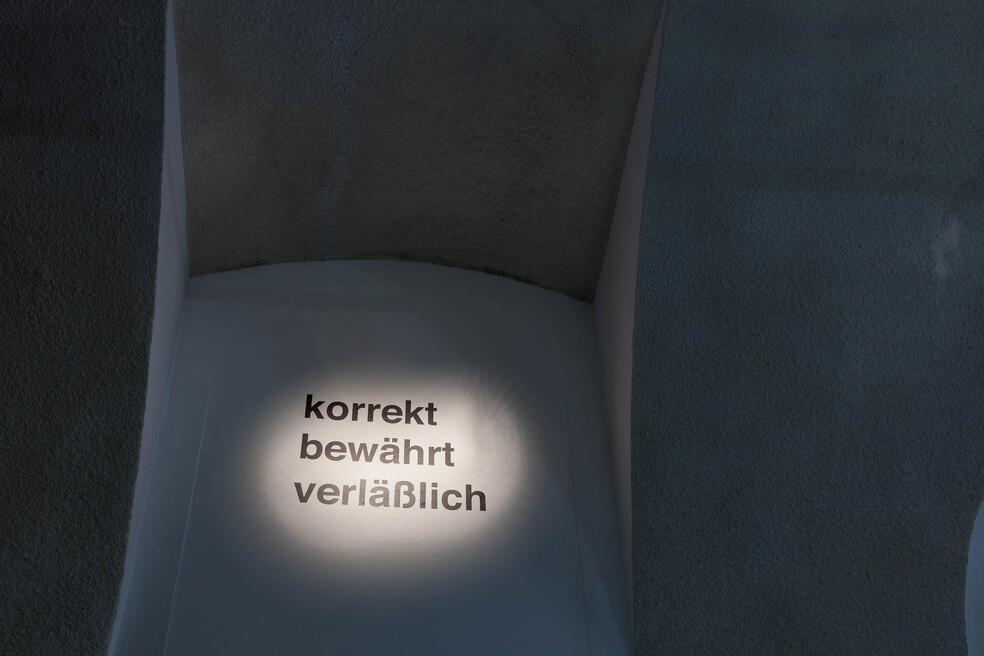 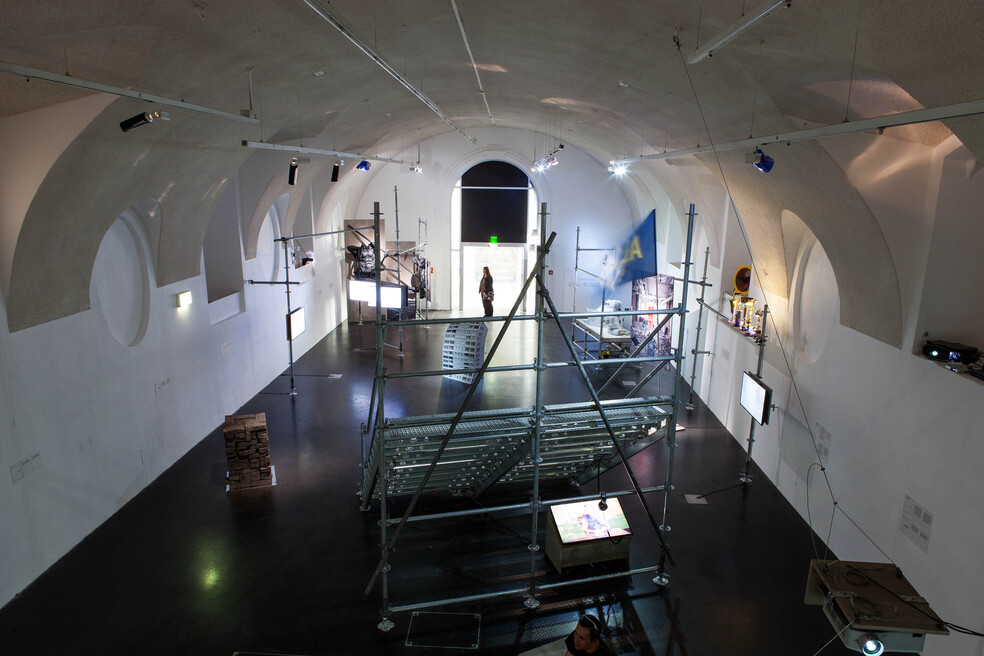 The artworks in the exhibition space are arranged around a monumental projection of Marta Popivoda’s* film study on “Yugoslavia: How Ideology Moved Our Collective Body (2013)”, with a very personal take on the history of socialist Yugoslavia and its tragic end. Archive footage shows not only the power of ideology to shape collective performances of crowds of people operating as one, it also shows the collective body's power to destroy the ideology.

The diversity of the works on show is illustrated by, for instance, distorted sculptures of urban social housing highlighting the inherent instability or shortcomings of such spaces, by Bernd Oppl. This work serves as a reminder that the EU required Austria, quite late in comparison to other countries, to allow guestworkers to qualify for social housing. They are positioned just around the corner from the “celebratory karaoke bar” by Olga Dimitrijević*. Based on interviews with different generations of women guestworkers, Olga Dimitrijević rewrote the lyrics of their favorite songs. Visitors can sing these “personal songs” in the karaoke bar as a celebration of these women's lives. The exhibition design specially conceived by Martin Hickmann, Universität Mozarteum Salzburg, is brought to glow with light installations by artist duo ATK!*.

AJNHAJTCLUB also provides a stage for self-organized cultural initiatives, such as the Hor 29. Novembar choir. Anybody can participate in this open collective founded in 2009 in Vienna, originally co-initiated by Alex Nikolic and Saša Miletić. In the words of the sociologist Rosa Reitsamer, this choir represents “a politically engaged popular music heritage which combines a critique of geographically fixed understandings of culture and racially confined notions of national heritage with raising the visibility of the migrants’ cultural past, and popular music past in particular, while fostering a dialogue between different generations of migrants in Austria” (Popular Music and Society, 2015). As a special guest star for the opening of the exhibition, the choir is supported by Vienna club “Lepa Brena” icon Turbo Tanja. As guests of the “AJNHAJTCLUB”, visitors are welcomed by new dance performances specially created by visiting performance artists Juan Pablo Cámara*, and Michele Rizzo* when they reached out to the local KUD Steven Mokranjac (Serbian folklore culture center) community.

Claudia Maté’s* 3D animation is an uncanny mix of sexually charged images inspired by milieu-specific imagery in the mass media. The avatars are both seductive and adorable, initially masking their meaning and distracting from their source. We enjoy them even though it feels wrong. Maté engages with the voyeuristic pleasure we derive in observing the social phenomenon of migration from a distance, working with avatars to suggest the connection between old and new migration, while also illustrating models of exploitation.

Vladimir Miladinović* has copied and enlarged the original “guestworker immigration” contract by hand to revise and re-articulate the relationship between the bureaucratic machinery of the state and migrant workers. It also highlights the current relevance of particular passages and how the wording has impacted on the latters' position in Austria.

Ljubomir Bratić, who worked on the “Archiv der Migration,” (migration archive) is showing part of his collection of objects in the exhibition. He also contributed to the research for the exhibition in an advisory capacity.

The first guestworkers clearly helped the growth of the Austrian economy, and “integration” has ensued for subsequent migrant generations, many of who are now naturalized Austrians. Artist Milan Mijalkovic's large format photograph presents a worker at the construction site adopting a heroic posture. This photo hangs on a wall symbolically created using old bricks, by Roberto Uribe-Castro*. Together these two works celebrate migrant workers' achievements, as does the performance at the opening reception “wir must arbeiten” (we must work) with five symbolic workers, in collaboration with Roter Teppich für junge Kunst. While Evelyn Benčičová & Adam Csoka Keller's photographs of invisible institutional infrastructure and public spaces in Vienna, most of which has a former-Yugoslavian (BKSM) background, illustrates why the second most popular language spoken in Vienna today is a BKSM language known as Serbo-Croatian.

The title is spelled in BKSM phonetics. As many newcomers to Austria could not speak German this spelling was often used to enable verbal communication between cultures, a phenomenon celebrated by Goran Novaković aka Goxilla.

“AJNHAJTCLUB” also has exclusive rights to pre-screen excerpts from director Mladen Đorđević's ongoing feature-length documentary film (working title “GASTARBEITER STORIES”) primarily about travelers, people who do not live either at the starting point nor at the final destination, people always somewhere in-between, on the road.

The exhibition explores the guestworker phenomenon, a phenomenon that is less remembered in some European countries than in others. In Austria it is still alive today, deeply embedded in daily life and not historically resolved. The term guestworker is a blanket one, confusing those who came under the contract signed in the 1960’s with all new generations of migrants.

The exhibition project AJNHAJTCLUB is organized in cooperation with the Federal Ministry for Europe, Integration and Foreign Affairs (BMEIA) and the Austrian Integration Fund (ÖIF). 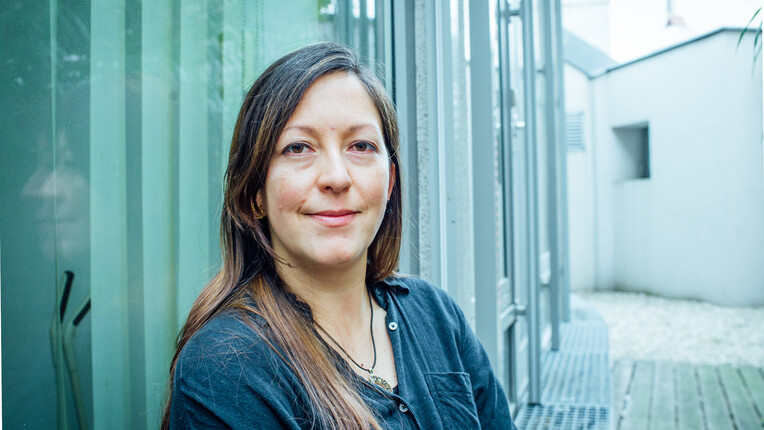 Leyla Cárdenas' contribution to the exhibition AJNHAJTCLUB are two huge Atlas statues made of aluminum foil, „carrying the weight“ of a scaffold which dominates the exhibition’s design. Read here… 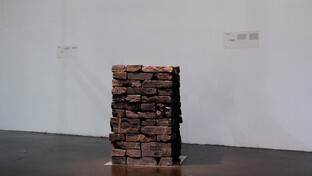