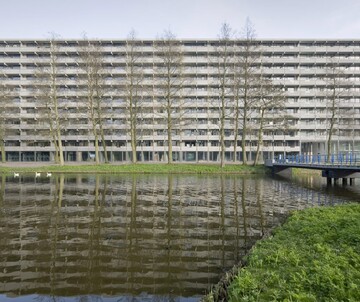 In the 1970s the Italian architecture theorist Manfredo Tafuri travelled to Vienna with colleagues to investigate the social housing of Red Vienna for the first time from a comprehensive architecture history perspective. The result was the legendary study Vienna Rossa.

Tafuri was an instigator of neo-Marxist debates in Italy during the postwar decades. He subjected the Viennese council estates to a stringent critique of their ideology by reproaching them for having lent expression to the crises of the times, at best (usually with nostalgia and pathetically romanticised), instead of helping to overcome these crises structurally. Even though, or perhaps precisely because, Vienna Rossahas not yet been published in German, many architecture historians consider the study to be important although few people, if any, follow Tafuri’s conclusions. Instead, in most publications it is usually used as a pretext to praise the buildings of Red Vienna.

At the Institute for Art and Architecture at the Academy of Fine Arts Vienna a group of students, supervised by Angelika Schnell, has researched thoroughly into the myths surrounding this study, its reception and its significance in times of increasing critique of capitalism. The opening of Collection with a View #4 begins with a reading. The series continues in early 2019, with further performative presentations.