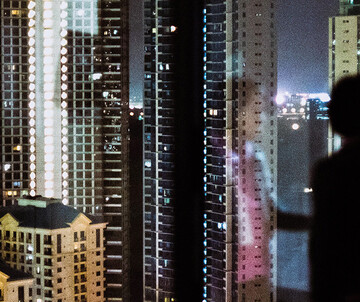 A hard drive, 2.8 terabytes, data left over from a project worked on a decade ago. In 2008 filmmaker and writer Iris Blauensteiner made her first short fiction film, and now she’s taking a look at the remaining material: outtakes, photos, audio files, emails, portions of the screenplay, ideas that were abandoned. The data was archived carefully, but time has left traces. Old formats can’t be played, current equipment isn’t compatible. Playback errors and visual interference make easy reminiscence impossible; the sounds and images are no longer what they were. Hauntingly magical scenes are created from the digital leftovers and errors, forcing their way into the range of the audible and visible.

The shadow industry of digital censorship on the web: whoever believes that a sophisticated algorithm or a form of artificial un-intelligence blocks Facebook users or Twitter accounts is wrong. In Manila, the world’s largest outsourcing location for content management, tens of thousands of people delete photos, videos and texts for technology corporations in ten-hour shifts. Decisions regarding censorship or whether content is made visible are outsourced to these content managers. Which criteria are employed for the work of these employees, most of them quite young, is one of the best-kept secrets of their bosses. The documentary shows these people at work, surfing the web with them during their daily routine, clicking from internet cleaning crews in Manila to Los Angeles, London and Berlin.

Moritz Riesewieck (director) and Iris Blauensteiner (filmmaker and writer) will be present.