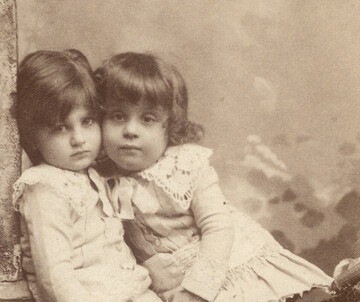 The photographer Otto Schmidt (Gotha 1849 – 1920 Vienna) operated one of the largest photographic art publishing houses in Vienna around 1900. The company offered study sheets as templates for artists, architects, carpenters and decorators. Mixed lots of his works have survived in art academies and vocational schools all over Europe, especially his nude, tree, rock, stone, hand and foreground studies, as well as photographs of architecture and arts-and-crafts objects.

The Atelier Schmidt additionally produced a highly popular series of Viennese types in nostalgic-romanticized dress which offered a sort of small-scale ethnography of the Imperial capital city. Schmidt’s work also accommodated the enthusiasm for the theater prevalent at the time, especially with his numerous role and ordinary portraits of the Burgtheater star Hugo Thimig whom he further used as a model for physiognomic studies.

Schmidt’s production of nude photographs may be regarded as the most extensive of the Austro-Hungarian Monarchy. Via international dealer networks, these photographs entered into circulation across the entire continent all the way to America, and were owned by numerous painters and sculptors. Aside from artists, the images were further studied by doctors, anthropologists and interested connoisseurs to gain insights, to illustrate their research, to propagate their social visions or to satisfy their curiosity. Depending on the degree of sophistication and ideology, the lines between “artistic” pictures and “indecent” ones – such as were forbidden by criminal law – were often blurred. Frequent court proceedings were testament to these struggles for social values.

This exhibition contributes to the exploration of professional photography in the 19th century. Using the example of the photographic publishing house Otto Schmidt, the presentation examines the insoluble connection between esthetics, economy, image consumption and social parameters.